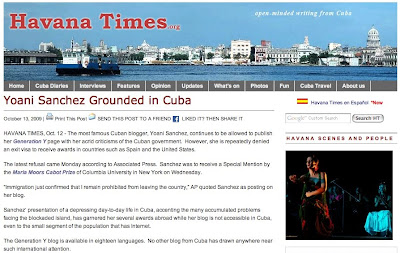 Generación Nyet
Refusing to let Yoani Sanchez leave Cuba to pick up international awards only draws more attention to her blog and her cause. Consider the headline in this EFE story:

Cuban Yoani Sanchez is the great absentee in the Maria Moors Cabot Prizes.

What would the headline have been if Yoani had been present? Perhaps Sanchez would have spoken about freedom of expression or restrictions on Internet use in Cuba. That would have gotten some attention, but it's not news. Sanchez hits on those issues all the time.
But if Sanchez had gone to New York, then news organizations would have reported that the Cuban government finally let her travel. That might have even gotten Cuban authorities some decent press. They would have been seen, perhaps, as tolerant.
But things didn't work out that way. Authorities said no. They declined to let Sanchez leave and that became the story for journalists hungry for a fresh angle to a potentially dull awards banquet.
The Havana Times reported the Cuban government's decision with the headline:

The Times, which was launched a year ago from Cuba and is now edited from Nicaragua, also published comments critical of the Cuban government's decision. Said Mark G:

Columbia University’s School of Journalism is arguably the top ranked journalism school in the world, and the Cabot prizes among its most prestigious awards. I’m an avid reader of Yoani’s blog. While not overly ideological, she’s an excellent writer who know how to get her point across.

A well-deserved award. Shame on the Cuban government for once again refusing to let Yoani leave the island to receive her award.

Sanchez didn't say much on her blog about the denial. She described the scene at the immigration office where officials told her "no."

Offices with uniformed people who confirm, “You may not travel at this time,” although I am already thousands of kilometers from here, in this virtual world that they cannot understand nor fence in. 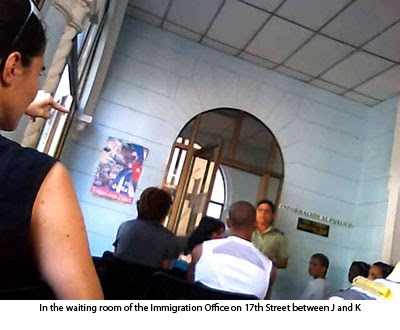