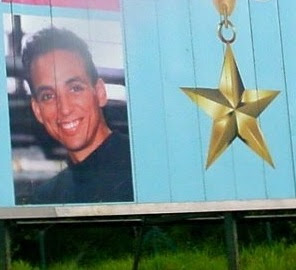 The face of Antonio Guerrero and the rest of the Cuban Five are splashed across billboards in Cuba, where they are seen as heroes.

The judge wasn't swayed.
U.S. District Court Judge Joan Lenard declined to go along with an agreement to reduce Antonio Guerrero's sentence from life to 20 years.
Instead, she ruled Tuesday, the Cuban agent will have to serve 21 years and 10 months.
The Associated Press quoted Lenard as saying that Guerrero committed "very serious offenses against the U.S." She said:

The government did not present evidence that the defendant obtained top secret information, but he worked to obtain such information.

Guerrero's lawyer, Leonard Weinglass, said the judge's decision surprised him because both prosecutors and the defense had agreed to a 20-year sentence. He said:

We negotiated an agreement with the government in good faith.

Link:
Along the Malecon's Spy vs. spy page
Posted by alongthemalecon at 5:09:00 PM