Multimillion-dollar Cuba program not easy to find on the Web

In late 2007, the U.S. Agency for International Development's Office of Transition Initiatives, or OTI, began a program to "support youth-led independent media initiatives" in Cuba. Initial budget: $8.63 million.
Few people knew about the program at the time. In May 2009, a Congressional Research Service report referred to OTI's Cuba effort. The author, Marian Leonardo Lawson, cited this OTI page as her source.
Since then, references to the program appear to have been removed from the OTI site. But the information is out there and has surfaced on several Web sites, including Voltaire Network and Granma, the official newspaper of Cuba's Communist Party. 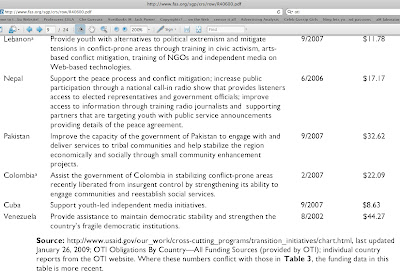 This is a screenshot from the CRS report mentioning OTI's Cuba program and showing author Marian Leonardo Lawson's source. 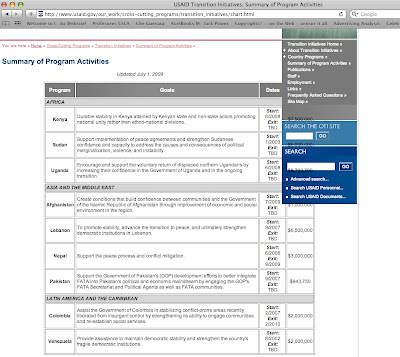 The CRS report says this Web page links showed information on the Cuba program. But that information no longer appears.

...the Economic Support Fund, a financial division of the State Department...has contributed $65.33 million to the so-called transition to democracy in Cuba over the last two years. An additional $20 million is scheduled for 2010.

At the end of 2007, USAID also opened an Office of Transition Initiatives (OTI) in the Cuban context, in order to work with youth and "independent initiatives from the media."

These OTI’s are USAID divisions set up to make a rapid response to political crises, to "solve" them in line with U.S. interests.

The OTI’s handle cash funds "in very large quantities without having to go through many reviews or accounting checks in the U.S. Congress." 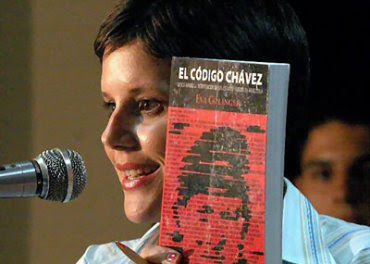 Eva Golinger
Source of photo: Voltaire Network
I don't envy the people at USAID. They face tough challenges.
They want to boost basic freedoms in Cuba. That's a worthy goal.
USAID officials also have a duty to be accountable to American taxpayers. They should do business in a transparent way. At the same time, their very mission requires that they be discreet with certain information. After all, they are trying to help pro-democracy activists who risk jail if Cuban authorities find out they are accepting U.S. assistance.
They must try to strike a balance between secrecy and accountability. That can't be easy. 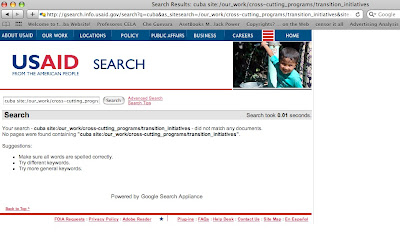 I searched for any reference to Cuba on OTI's Web site and came up empty. I jumped to the conclusion that U.S. officials were trying to keep the program secret. But it may be more accurate to say that officials simply don't want to broadcast to the entire world what they're doing. That doesn't necessarily mean they're trying to keep it secret.
The OTI program's existence is clear to anyone wading through the 2010 State Department budget. See page 56 of this 357-page PDF.
Posted by alongthemalecon at 8:05:00 AM