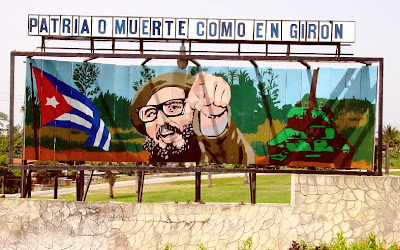 Report on embargo: "Nothing has changed through ten successive US governments other than a tightening of this policy. Nothing essential has changed either since the new US government was inaugurated in January 2009."
Here is a new Cuban government report on the impact of U.S. economic sanctions against Cuba. The United Nations General Assembly is set to vote Oct. 28 on a resolution condemning the sanctions, a Cuban Ministry of Foreign Affairs statement said.

According to the report:
* ...there has never been such a wide-ranging and brutal embargo against a people like the one the US is maintaining against Cuba.
* The media and diplomatic offensive unleashed by the US government could erroneously lead one to the belief that the embargo against Cuba has started to be dismantled. However, nothing is further from the truth...
* The economic, trade and financial embargo, imposed by the government of the United States against Cuba, continues being the prime obstacle to the economic and social growth of the country, as well as for its recovery after the passage of three devastating hurricanes that affected it in 2008.
* ...the embargo is morally unsustainable. There is no like unilateral system of punishments in existence being carried out against any other country in the world for such an extended period of time.
Link:
Cuban government link to the report
Posted by alongthemalecon at 11:30:00 AM