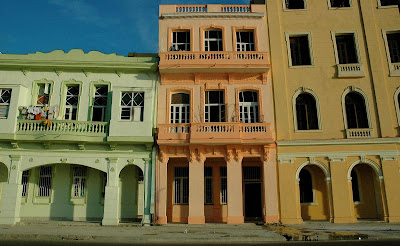 Havana, Cuba
The U.N. General Assembly on Wednesday voted 187-3 to condemn the U.S. trade sanctions against Cuba. Only two other nations - Israel and Palau, both heavily dependent on U.S. aid - sided with the United States.
The lopsided vote was expected. What's new is the "political symbolism," Phil Peters wrote in The Cuban Triangle.
Peters, a former State Department official, is a Cuba expert at the Lexington Institute. He wrote:

...the embargo now belongs to President Obama. That is a point the Cuban government likes to make internationally, reminding foreign governments that change has not reached all parts of U.S. foreign policy and that the embargo, with many of the elements added by President Bush, remains intact under President Obama.

The Associated Press described the vote as "an annual ritual that serves to highlight near unanimous global opposition to America's hard-line policy toward the communist island, but which has done little to change Washington's stance, even with a new administration."
The AP said:

This year's vote was 187-3 in opposition to the embargo, with only Israel and the tiny Pacific island nation of Palau supporting the United States — just as they did last year. It was the 19th year in a row that the General Assembly has taken up the symbolic measure, with Washington steadily losing what little support it once had.

Cuban Foreign Minister Bruno Rodriguez ticked off a long list of grievances in his speech before the world body, saying the embargo — which the Cubans refer to as a blockade — had cost the island's fragile economy tens of billions of dollars over the years and prevented Cuban children from getting needed medical care.

"The blockade is an uncultured act of arrogance," Rodriguez said. He likened the policy to "an act of genocide" that is "ethically unacceptable."