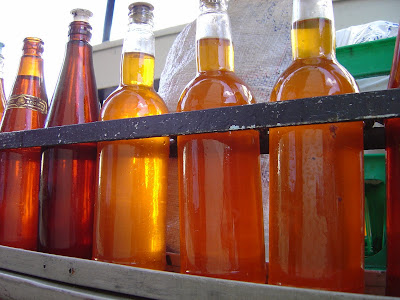 Bottleneck in Cuba trip
The New York Philharmonic abruptly cancelled its trip to Cuba after the Treasury Department said it would not allow a group of wealthy patrons to go with the musicians.
Miami radio host Francisco Aruca claims that Sen. Robert Menendez, D-N.J., pressured the Obama administration to deny the patrons permission to travel to Cuba.
In exchange, as I understand the story, Menendez, a Cuban-American who opposes Cuba's socialist government, will ostensibly support the Obama administration's health care plan.
I don't know if this tale is true or not, and I haven't heard the version of events from the senator or from Treasury. 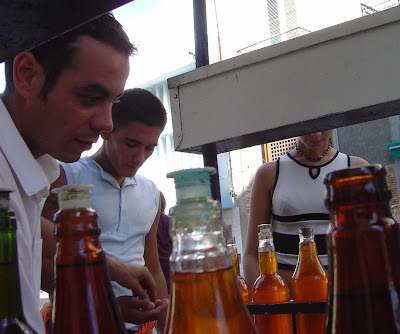 People crowd around seller of granizados, a drink made with crushed ice
Aruca said in an e-mail message that he learned of the supposed deal from Edmundo Garcia, co-host of their radio program.
Aruca said Garcia said that a "very good source" told him that the Office of Foreign Assets Control, an arm of the Treasury Department, was "blackmailed" into denying travel permission. Aruca said:

This Cuban-American senator was shocked by the success of Juanes' concert in Havana, and did not want any more of this.

Aruca said he considers Garcia's information to be reliable. He said:

... I am convinced that Bob Menendez was the trigger behind this decision, and even more importantly, is using the future of access to health services by the American people as the hostage in this political blackmail scheme.

The Philharmonic had planned to go to Cuba at the end of October. But without its patrons and the $10,000 they were each going to pay to go on the trip, the orchestra can't afford to go, the New York Times said. The paper said:

The money was to have covered the cost of the proposed trip, which came at the Cuban government’s invitation.

Whatever the reason behind OFAC's decision, some people in Washington applauded it. Capitol Hill Cubans said the orchestra never had any intention of helping the Cuban people and that the trip was more about "exotic tourism." 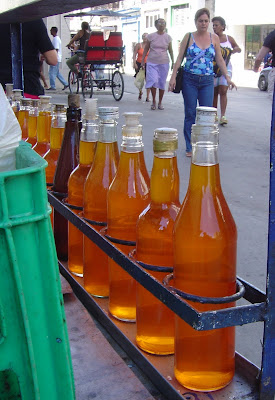 According to the blog:

By holding the entire concert hostage to their desire for an exotic tourism destination, the New York Philharmonic's donors have proven that they never had any philanthropic intent to foment cultural exchanges or help the Cuba people.
It was always about their self-interest.
That's not philanthropy. That's elitism.

Meantime, the orchestra continues trying to work things out with U.S. officials from not only Treasury, but the State Department, the Miami Herald says.
According to an orchestra statement, evidently aimed at trying not to offend anyone:

The U.S. Departments of State, and the U.S. Department of the Treasury, have been very helpful in the planning of this project to date, and we greatly appreciate their support. We will continue to seek a mutually acceptable solution, and hope to be able to reschedule the New York Philharmonic' s visit to Havana as soon as possible. 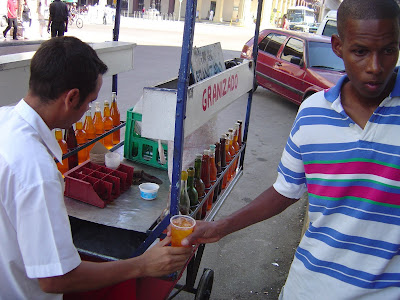 Update:
On Oct. 5, John McAuliff of the Fund for Reconciliation and Development added more detail to this story's political backdrop. Writing in the Havana Note, he said:

If Menendez made such a threat, I am surprised it was taken seriously. On most issues, other than Cuba, he is a progressive Democrat. He could hardly afford to oppose the President on his signature issue of health care. The reaction would have been anger from his constituents in New Jersey and from national Democrats whom Menendez must solicit for contributions as head of the Democratic Senatorial Campaign Committee.

He said the Obama administration certainly had the authority to allow the trip.

The underlying law permits such travel and the support group was an inherent part of making the event happen.

Denis McDonough of the National Security Council may have laid the groundwork, according to The Hill newspaper. Language enabling non-tourist travel had been predicted in the Washington Post, but was missing from the April announcement after McDonough met with Sen. Bob Menendez (D, NJ). Had McDonough stood up for the President's principled commitment to exchange and dialogue, or had the regulations that were finally issued a couple of weeks ago restored non-tourist categories, the Philharmonic would soon be on its way to Havana after an Asia tour that included Vietnam.

Still, McAuliff hopes the trip will be salvaged.

Bottom line, President Obama and Treasury Secretary Geithner can still save the Philharmonic program in Havana at the end of October by quickly directing OFAC to interpret the regulations more reasonably. Then they should finally undo all of Bush's harsh anti-travel policy by announcing regulations enabling non-tourist general licenses.
The Philharmonic in Havana can be a triumph artistically, culturally and diplomatically but the President very quickly has to choose who matters, Miami hard liners represented by Senator Menendez or the two-thirds of Americans who want travel restrictions to end.