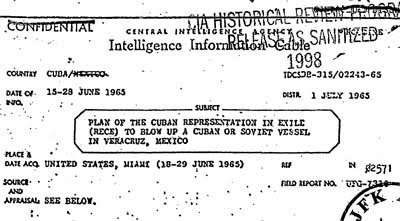 Here's some fascinating new information on Posada Carriles from the National Security Archive.

Below is the National Security Archive release, verbatim:

Washington, DC, October 6, 2009 - On the 33rd anniversary of the bombing of Cubana flight 455, the National Security Archive today posted recently obtained CIA records on Luis Posada Carriles, his ties to "the Company" and role as an informant on other violent exile groups. The documents provide extensive details on a collaboration between Cuban-American militant Jorge Mas Canosa, who rose to become the most powerful leader of the hardline exile community in Miami, and Posada--codenamed AMCLEVE 15--who volunteered to spy on violent exile operations for the CIA.

The documents include a July 1966 memo from Posada, using the name "Pete," to his CIA handler Grover Lythcott requesting permission to join the coordinating junta for four violent exile groups, including RECE run by Mas Canosa. "I will give the Company all the intelligence that I can collect," Posada wrote. "I will gain a more solid position between the exiles and, because of that, I will be in a better position in the future to perform a good job for the company."

In a memo, Grover Lythcott described Posada as "not a typical 'boom and bang' type of individual" who was "acutely aware of the international implications of ill planned or over enthusiastic activities against Cuba." A CIA personnel record suggested that Posada would be "excellent for use in responsible civil position in PBRUMEN"--a codename for Cuba--"should the present government fall."

Both CIA and FBI intelligence records identify Posada as a mastermind of the bombing of Cubana airline flight 455, using a pencil detonator, that took the lives of all 73 passengers and crew on October 6, 1976. Posada has publicly admitted ties to a series of hotel bombings in Cuba in 1997; in November 2000 he was arrested in Panama City for plotting to blow up an auditorium where Fidel Castro would be speaking. He is currently living freely in Miami, awaiting trial in El Paso, Texas, early next year on charges of lying to immigration authorities about his role in the hotel bombings, and as to how he illegally entered the United States in the spring of 2005.

"The documents show Posada has a long history of trying to ingratiate himself with the CIA," said Peter Kornbluh, who directs the Cuba documentation project at the National Security Archive, "perhaps attempting to buy himself a degree of protection as he engaged in a career of terrorism." He called on the CIA "to release its entire operational file on Posada Carriles and his activities, to clarify the history of anti-Castro violence and advance the cause of justice for Posada's many victims."

Whoa. Thanks for the tip. The Archives always have enlightening stuff.

Yeah, they do a great job finding interesting documents.