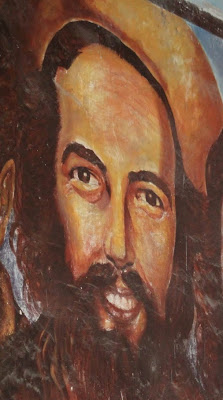 Camilo Cienfuegos
A fame-seeking former snake collector once told reporters that Fidel Castro murdered Camilo Cienfuegos, then Castro's people dumped acid on the body to destroy it.
Historian Katrina Gulliver explores the claim in an Oct. 19 article entitled "The Woman Who Attempted to Etch Herself into the History of the Cuban Revolution."
The ex-snake collector, Vani L. Maris, first said she gave blood to Cienfuegos after he was mortally injured in a plane crash in 1959.
Later Maris changed her story, saying that Fidel Castro killed Cienfuegos, and then his followers destroyed the body. She said she was with Cienfuegos' brother, Osmany, at the time. They were outside the Presidential Palace in Havana when Maris said she heard two shots. She said she later went inside the palace to make a phone call and saw the body.
Gulliver says there's no evidence for her claim, but it was widely reported as fact. Gulliver writes:

The elements of her practically stepping over the body to make a phone call, the gruesome injuries, and the acid destruction of the corpse, all sound like plot devices from a gangster film. Nonetheless, her story – again syndicated by the Associated Press – was reprinted by newspapers across the USA.

We'll hear more about Cienfuegos in the coming days. The 50-year anniversary of his disappearance is Oct. 28. 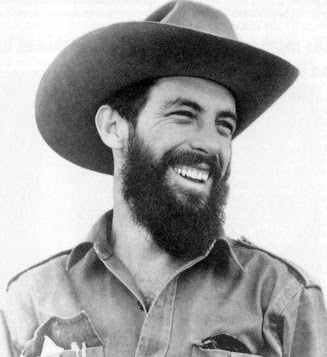 Source of photo: The Revolutionaries
Cienfuegos was aboard a Cessna 310 that disappeared over the water while traveling from Camagüey to Havana. The plane was never found and that gave Maris an opportunity. Gulliver writes:

Biographers have differed but the consensus seems to be that the plane crash was likely an accident.
But the hidden truth of his death, and the lack of finality in the absence of a crash site, gave Maris a window in which to create a counter-narrative, an evolving version of events for American readers in which Fidel Castro was increasingly culpable.

Gulliver says she doesn't know what became of Maris, who would be 88 if still alive. I'd love to talk to Maris. Maybe she has another story to tell. If anyone has any information on her whereabouts, please send it to Along the Malecon and I'll post it.
In Cuba, Castro supporters have vehemently denied that the former president had anything to do with Cienfuegos' death.
Cienfuegos remains a martyr for the revolution. And on the anniversary of his disappearance, Cuban school children go to the Malecón to throw flowers into the sea.
Link:
On Sept. 4, 1955, Maris appeared in episode #274 of What's My Line?
Posted by alongthemalecon at 7:34:00 AM

Thanks for your post, I'm glad you liked the article.

Katina,
Yes, I liked your story. You put the spotlight on an interesting character who has been forgotten by most people. Any idea ever happened to Vani Maris? Tracey

I messed up the link to Katrina's story in my initial post. It's fixed now.

I am afraid I have no idea what became of her. I wrote to Hugh Thomas, but he doesn't still have his notes from when he was writing about it. (I thought he might have some info on the insanity story)
I also tried looking for her in public records in the US and came up empty, but of course if she went to another country it's needle/haystack time. Government records (such as re. the citizenship renunciation) are not available on people who are (possibly) still alive (she would be 88 now).
But if anyone has any info, I'd be delighted to know about it.