Credit: Christine Cornell/New York Daily News
Accused hijacker Luis Armando Peña Soltren may have given up his life in Cuba because he wanted to be with his wife in the United States, Reuters reported today.
Peña Soltren, 66, turned himself in on Oct. 11 after living in Cuba for 41 years. He's accused of hijacking a Pan American flight to Havana in 1968.
He has spent "the past several years seeking to return to the United States, ever since his wife left Cuba," said his lawyer, James Neuman. Said Reuters:


The lawyer's comments offered the first potential explanation for why Peña Soltren would give up freedom in Cuba for a jail cell in the United States.

I wonder what life was like for Peña Soltren in Cuba. Was he fed up? Did he figure he'd have a more comfortable life in prison? Did he really leave Cuba for family or sentimental reasons?

He has pled not guilty in the hijacking.
It'll be interesting to see how prosecutors handle his case. I imagine that some witnesses are dead by now. Others will be hard to track down. So will prosecutors have enough to convict?
I can't imagine that Peña Soltren will get much sympathy. He put a planeload of people at risk and never paid for his crime. I'm sure some judges and juries would be eager to throw the book at him. 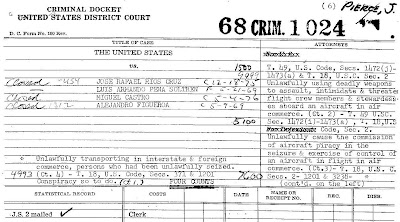 I checked federal records tonight and only four documents had been filed in his case so far. Links:

More background can be found in the FBI's Oct. 12 press release
Posted by alongthemalecon at 9:20:00 PM