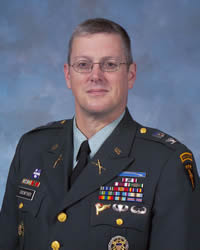 Glenn Crowther. Photo credit: Strategic Studies Institute
Cuban armed forces should be subordinate to civilian authority in the post-Castro era. They should extract themselves from the Cuban economy. And they shouldn't oversee domestic spying.
Those are among the recommendations in a 2007 U.S. Army War College report called "Security Requirements for Post-Transition Cuba."
The author, Glenn Crowther, is a research professor at the college's Strategic Studies Institute. He describes how he believes the Cuban military should look when the Castro brothers are no longer in power.
He even suggests troop size, saying, "...a military of around 49,000 is probably about right for Cuba." 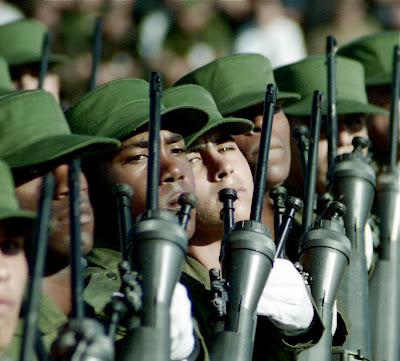 Cuban soldiers equipped with Soviet sniper rifles
Crowther writes that U.S. military officials ought to engage their Cuban counterparts, but without giving off a sense of superiority. He writes:

Be magnanimous. Do not seek to humiliate Cuban security forces.

Crowther assumes that the U.S. government will play a central role in shaping the Cuban military in the future. And there will be challenges, he writes.

* First, the Cuban military is a founding part of the state and will not give up
power easily.
* Second, the Cuban military is in control of a major portion of the Cuban economy, and it will be very difficult to convince it to cede this position.
* Third, many of the elites have come from the military, and they will be strongly motivated to maintain an interventionist stance for the military.
* Fourth, the military could form a power base from which opposition elements could challenge a post-transition government.

By "post-transition government," I think Crowther means a government that the U.S. supports and, perhaps, imposes on Cuba.
Whatever the case, the stakes are high, he writes.

Mishandling security issues transitioning Cuba could have significant negative effects upon the United States, so preparation is important.
The worst case scenario would find Cuba descending into chaos if no one could replicate Fidel’s ability to hold Cuba together. 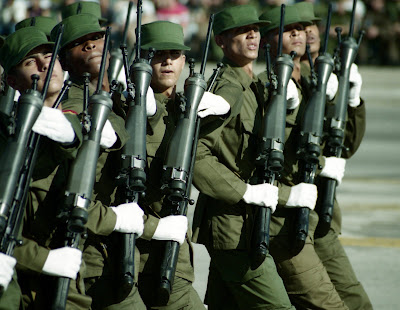 It's not that Cuba poses a great military threat, he said. Crowther writes:

Most Cuban military aircraft are not operational.

I find that's startling. I wonder if Cuban military capabilities have improved since the report was written in 2007. I would guess that since then the Cuban military has gotten some support from China, Russia and Venezuela.
Certainly, Crowther's report gives interesting insight into U.S. military thinking. It also provides details on Cuba's armed forces. It says, for instance, that country's Air Force has:

* ...up to 103 fighter aircraft and 63 transport aircraft spread out at a variety of airfields throughout the country.
* ...two active fighter squadrons, based at San Antonio de los Baños and Holguin respectively, equipped with this mix of fighter aircraft.
* ...40 attack helicopters and 85 support helicopters.
* ...13 surface-to-air missile sites.

Due to the perceived threat from the United States, there is an Air Defense Force called the Air Defense of the Revolutionary Armed Forces (Defensa Anti-Aerea de las Fuerzas Armadas Revolucionarias or DAAFAR) which has SA-2, SA-3, and SA-6 surface-to-air missiles and 23-mm, 37-mm, 57-mm, 85-mm, and 100-mm antiaircraft guns in great quantities.

Crowther envisions a much different Cuban military. In the future, he says, Cuban armed forces won't need to fear the United States. And Cuba will no longer need its Committees for the Defense of the Revolution, also known as CDRs, and its territorial militia troops.
Castro loyalists are going to love reading about that.
Posted by alongthemalecon at 7:11:00 AM

This Yankee imperialist military man is a great idiot.

Let him keep his nose inside the continental United States.

The last time that the U.S. told Cuba how to run its internal affairs was December 31, 1958. On the following day, New Year's 1959, the Cuban people kicked the Yankees and its Mafia out of the country.

Cuba was finally FREE. But the only freedom that the imperialists really like is one where a country is subservient to the interest's of Yankee imperialism. That is why the Americans are disliked throughout the world.

Cuba may make mistakes, but at least now Cubans rule the island.

Keep the gusanos in Miami!

Think of all the public and private jobs in the U.S. that are aimed at regime change in Cuba. It's an industry.

Thanks for the info, keep posting.

I appreciate the work of all people who share information with others.

It is easy to see that you are passionate about your writing.

Advantage Term Papers – We do it your way

Hello my friend! I want to say that this article is awesome, nice written and include almost all vital info. I would like to see more posts like this.
resume service