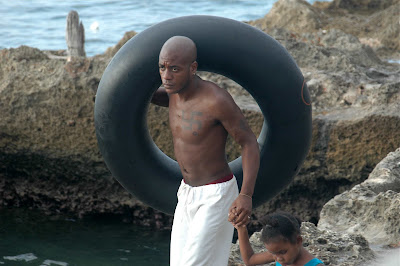 An attention getter
I wonder what possessed this black man in Havana to get a big tattoo of a swastika on his chest?
I was walking along the Malecon when I saw the man, his tattoo and a little girl who must be his daughter.
Did he get the tattoo without knowing what it symbolizes? That seems to hard to believe.
It makes me think of the David Chappelle episode where the comedian plays a reclusive blind white supremacist who isn't aware he's black. Remember that one?
I know that some parents in Cuba have named their children after words they see without fully understanding what those words mean.
One time I interviewed a woman named Usnavy. Get it? U.S. Navy.
Cubans have told me they've known people named Usmail and Onedollar.
So maybe it's not too far-fetched to think this guy didn't know what the Nazi symbol meant.
Or it could be a peculiar statement about racism. Who knows? I wish I had just asked, "Hey, what's the deal with that tattoo?" 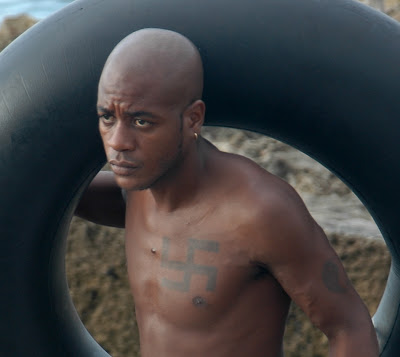 P.S.:
A reader pointed out that the swastika is a symbol in Buddhism. So maybe this man got the swastika tattoo because he has some interest in Buddhism. That makes much more sense. And I didn't notice it before, but it looks like the tattoo on the man's left arm may be yin and yang. So perhaps this mystery has been solved.

Link:
Information on stastika symbol in Buddhism.
Posted by alongthemalecon at 6:40:00 AM

It was a buddhist symbol long before hitler and the nazi's

wow, I didn't know that...maybe that explains it

the nazi symbol is slanting, while the buddhist one is straight. The one that we see is straight, contrary to those we can see on neo nazis (remember american history X for example)

The word swastika is derived from the Sanskrit(svastika), which means that what is favourable or gelukbrengend and, in particular, as a sign for persons and objects for their luck. The word is made up of su (corresponding to the Greek ευ-), which means "good" and that "as are" means with suffix ti; svasti means "well-being" and stands for "something that overall welfare or happiness brings". The suffix -tika literally means also character; for this reason, in India the alternative name shubtika (literally good sign) is used. The word is the earliest found in Classical Sanskrit (in the epic stories Ramayana and Mahabharata).

obviously the person who wrote the article dosent know what it means. it has been around for more than 3000 years and has been used by many religions. swastika roughly translates to "good, to be"

It doesn't matter if it slants. That is pure BS. I mean, in 1734 do you think Buddhists said "can't slant the swastika, it means Hitler!" No way.

Even native Americans used the swastika and some of theirs SLANT and are enclosed in circles. Just like the Nazi version.

So, cherry Blossom Girl is wrong.

Why did you not ASK him politely?? Duhh..

yeah, it would have been a good idea to ask...