Campaign contributions prompt some lawmakers to support embargo against Cuba 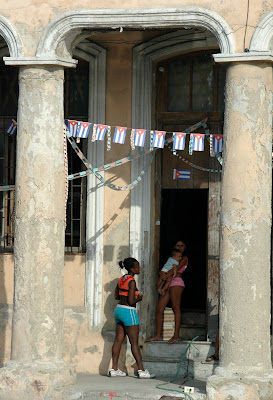 Perhaps it's the age-old story of money and politics, but 18 members switched their votes on the subject, some in very close proximity to when they got donations.
When an issue is not in the front view like health care, our campaign finance system sets up a situation in which the members are more interested in the money than deciding a rational, reasoned approach to politics, regardless of what the outcome.

Mauricio Claver-Carone, director of the U.S.-Cuba Democracy PAC, told the AP it is "exercising its constitutional right to political participation." He said:

Link:
Miami Herald's story on the report
Posted by alongthemalecon at 6:03:00 AM

This article reaffirms an undeniable fact: The greatest ally the Castro's have; the people they've always been able to count on in helping manipulate the "Hovering Giant" of the North, are the Cuban exile elite. These men, with their millions, have insured that the embargo, that life sustaining source of isolation and insulation (like the Berlin wall)remains in place. Without this embargo, which serves as an excuse for Castro's failures and a barrier against corrosive freedom, Castro's dictatorship would have collapsed long ago. The real question now that Castro is about to die: Why do these individuals see violent change as beneficial? Are they looking to replace a tyranny of the left with one of the right? If so, what's the difference...tyranny is tyranny.

TGonzalez,
Thanks for your comment. I've always thought that flooding Cuba with American travelers, money and ideas would do more than trying to impose our will.
The U.S.-Cuba fight over Cuba is many decades in the making and I suspect it'll take a long time to sort out.
Tracey