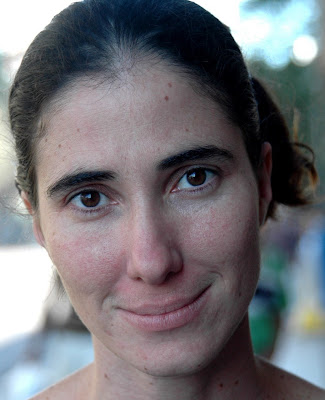 Yoani Sanchez
The legend of Yoani Sanchez grew Friday after Cuban authorities snatched her off the street, shoved her into a car and roughed her up before freeing her.
Sanchez told El Nuevo Herald:

Sanchez said she and two others - Orlando Luis Pardo and Claudia Cadelo - were on their way to a peaceful march against violence when several men intercepted them.
They demanded she get into a car and Sanchez said she refused. She said:

I did not know if they were kidnappers or what.

The men, evidently state security agents, became angry, Sanchez said. She said they shoved her and Pardo into a car, used martial arts holds to restrain them and then hit them.
During the attack, Sanchez said she managed to grab a piece of paper from the pocket of one of her assailants and put it her mouth. She said:

It was as if to say: 'I have something of yours.' The paper contains the name of a person and a phone number.

The man grew "even angrier," she said, and smacked her some more.
The episode ended after about 20 minutes, she told the newspaper.
I have not seen the Cuban government's version of events.
Cadelo, also a blogger, was shoved into a second car. She reported some of the details of the episode on Twitter. 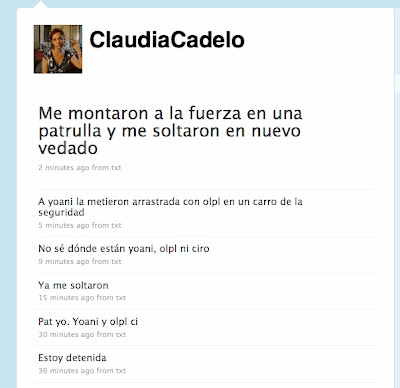 Luis Eligio, of the counterculture group OMNI-Zona Franca, and two rappers organized the march. About 200 people took part, the blog Penúltimos Dias said. Reuters put the number at 60.
On Oct. 20, Sanchez was one of more than 10 bloggers who staged a "virtual protest" using Tweets, cell phone text messages and blog posts to call for the release of political prisoners.
All this puts the socialist government in a tough spot. The more force authorities use, the easier it will be for opposition activists to recruit followers.
These incidents also help galvanize international support for Sanchez and other bloggers. This support grows at an exponential rate, colonizing cyberspace and making it difficult for the Cuban government to effectively counter.
Link:
Along the Malecon's Yoani & other bloggers page
Posted by alongthemalecon at 9:43:00 PM

Tracey, good work and sharp analysis. I got the news from PD and Tamayo also. Put it up on my blog too El Yuma. It looks like we may be coming to a confrontation. Pero contra el ciberespacio y la nueva generacion el gobierno no peude. Also I like your Yoani/blogger page. Very useful to see the history. Ted Henken.

Thanks, Ted. It'll be interesting to see how the government handles the situation.
Congratulations on your blog.