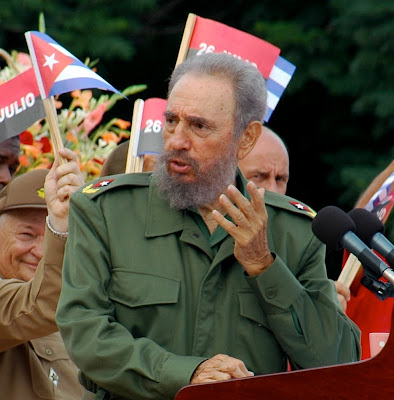 Whose house is this anyway?
Hugo Chavez over the weekend invited Fidel Castro to an event to be held in the former Cuban president's own country.
The Bolivarian Alliance for the Peoples of Our America, ALBA by its Spanish initials, plans to hold a summit in Havana on Dec. 13, the trade bloc's fifth anniversary.
Castro could have easily invited himself - or just dropped by - since he helped create ALBA. But Chavez, the president of Venezuela, didn't give him the chance. In his usual blustery fashion, Chavez said:

We are publicly inviting Fidel to the ALBA summit, which will be in Havana in December.

Castro is in firm control of his mental and physical faculties, Chavez went on during a public appearance in Venezuela.

Nobody should believe that Fidel couldn't be sitting here. He could stand here and talk for an hour, two hours, in a tone of voice similar to mine.
One time in Europe, they asked me, 'Tell us the truth. Did Fidel go crazy? Is he in an insane asylum?'

No, Castro is not in mental institution, Chavez said. Castro is healthy, he said.

Fidel is my father. I feel like a son of Fidel...