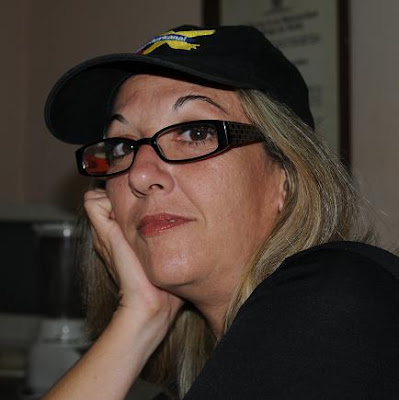 Photo credit: Twitter
Supporters of the Cuban government aren't at all happy with Yoani Sanchez. They've described her as an "agitator," "counter-revolutionary" and, more recently, "cyber-clown."
Perhaps their most serious accusation is that foreign governments and organizations finance Sanchez and other bloggers to try to topple the socialist government.

The bloggers' critics include Cuban journalist Vladia Rubio Jiménez. Reacting to Friday's peace march, she wrote today on her blog:

Frankly, I find the matter rather shady. From now on will we see "spontaneous" protest marches? Violence against what were these guys demonstrating with their signs? Would it be against what is happening in Afghanistan, Honduras, or against what happened on the biggest U.S. military base where a madman shot and left 13 people dead and several injured?

Rubio Jimenez, who was born in 1963 and graduated from the University of Havana with a journalism degree in 1987, describes Sanchez as an "agitator" and describes her "alleged detention" as a "fallacious media construction."

...where are the pictures of the bruises and machacadera...?

Rubio Jimenez writes that Friday's protest seems to have been "organized mainly through some blogs, including Octavo Cerco..." And she says she's amazed to see that the bloggers have cell phones and "fast Internet connections" that "even allow them to upload videos ..."

Nowhere does it say clearly who called for that march. All over the world, these demonstrations must have a government permit, just for protection and to prevent disturbances to traffic and other possible consequences.

This is hilariously funny. Yes they should have gotten a permit so they wouldn't block traffic.
a -- they're almost all on the sidewalk.
b -- what traffic? Has she noticed there are no CARS on the street because there is no FUEL (see latest photo on Penultimos Dias... not a car in sight)... there is PLENTY OF ROOM TO WALK IN THE STREET.

It can't be easy coming up with reasons why walking around calling for love and peace is an evil, subversive thing.