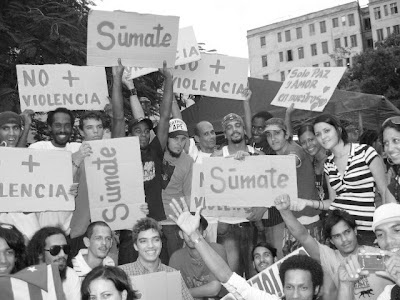 Preguntas
It's hard to judge, from afar, the importance of Friday's peace march in Havana. I've always wondered how the Cuban revolution will evolve and how people will seek change. I wonder whether this march was part of the push for change. Or was it something else?
As usual, I have more questions than answers. Among them:
1. Why did dozens of young people decide to march in Havana on Friday? Were they showing support for the World March for Peace and Nonviolence? That initiative began on Oct. 2, 2009, and culminates with a rally at Mount Aconcagua in Punta de Vacas, Argentina, on Jan. 2, 2010.
2. Are the marchers mostly supporters or members of Omni Zona Franca, an Alamar performance art group that evidently helped organize the event? Or do the marchers represent a broader cross-section of society?
3. Were there any anti-government undercurrents at the march?
4. Will there be similar demonstrations anytime soon or was this a one-time deal?
5. How did ordinary Cubans on the street react to the march?
6. Why did police decide to stop Yoani Sanchez and the others from taking part? Do authorities fear she'll gain more support and recognition on the island if she appears at these kind of public events?
Links:
Global Voices' take on the episode
Along the Malecon's Yoani & other bloggers page
Posted by alongthemalecon at 6:55:00 PM