Welcome to the Inspection House 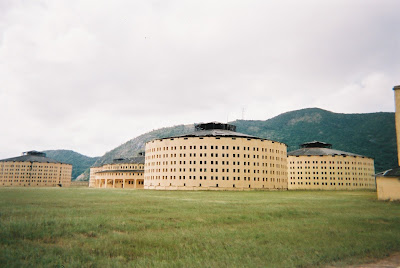 Presidio prison on Isla de Juventud in Cuba has a Panopticon design, which allowed guards to observe without prisoners knowing it. Photo credit: Wikipedia 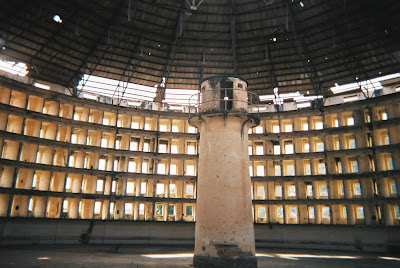 Mind control prison. It was built from 1926 to 1931 and held 6,000 prisoners, Wikipedia says.
Fidel Castro was jailed on the Isla de Juventud after his failed attack on the Moncada barracks in 1953. He stayed at the Presidio prison, designed so that prisoners can't see if they are being watched. An English philosopher and social theorist named Jeremy Bentham created this design in 1785. He called it a new way to get "power of mind over mind." 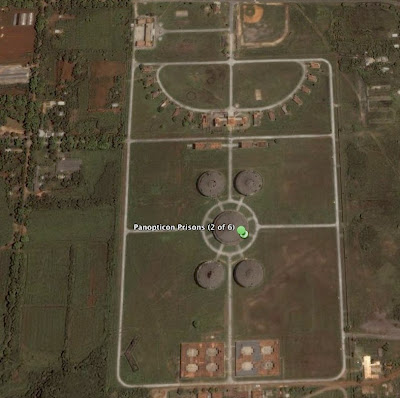 The prison is now a museum.
Photo credit: Google Earth. Or see it in Google Maps.
Bentham wrote that his design was useful no matter the purpose of the building

whether it be that of punishing the incorrigible, guarding the insane, reforming the vicious, confining the suspected, employing the idle, maintaining the helpless, curing the sick, instructing the willing...

... in all these instances, the more constantly the persons to be inspected are under the eyes of the persons who should inspect them, the more perfectly will the purpose X of the establishment have been attained.

Guards can't observe inmates "during every instant of time," Bentham wrote, but prisoners should believe they are being watched at all times.
Posted by alongthemalecon at 3:37:00 PM