An American scientist accused of introducing dengue fever to Cuba as part of a supposed biological warfare attack in 1975 denied the accusation in his first in-depth account of the episode.
Charles Calisher, a microbiology professor at Colorado State University, tells his story in the November issue of Nonproliferation Review.
In 1975, Calisher was a diagnostic virologist who worked for the U.S. Centers for Disease Control, now called the Centers for Disease Control and Prevention. He was also director of the World Health Organization’s Collaborating Centre for Arboviruses in the Americas.
Cuban health authorities invited him to Cuba to "test and supervise the testing of 3,000 human blood serum samples for antibody to viruses causing dengue and equine encephalitides." In an 11-page story, Calisher wrote:

I flew to Havana on Cubana Airlines Flight 465. I arrived on April 8, 1975, at 1:45 a.m. Enthusiastic representatives of the Institute of Hygiene, Epidemiology, and Microbiology met me at the airport and escorted me to a hotel, where I settled in for my eighteen-day stay. The next day we got to work.

Calisher said he brought with him a large number of vials containing...antigens for:

The Cuban authorities worried that I had not completely inactivated all these viruses and insisted that vials containing antigens of yellow fever and Everglades viruses be autoclave-sterilized. Although these antigens had been rigorously tested to be certain they did not contain viable virus, I understood their concern, so we sterilized and discarded the vials.
I had also brought seed viruses of western equine encephalitis, St. Louis encephalitis, and Ilheus viruses; antibodies to dengue virus 1, dengue virus 2, dengue virus 3, dengue virus 4, Ilheus virus, Everglades virus, western equine encephalitis virus, and eastern equine encephalitis virus; and a broad grouping antibody for the flaviviruses. All these were retained and used in my work there. Cuban scientists, technicians, and I prepared the serum samples, tested them, and interpreted and summarized the results over the course of my stay. It was altogether a successful scientific investigation.

Calisher said his colleagues at the Institute of Hygiene, Epidemiology, and Microbiology were "well-educated, pleasant, and hard-working."
While in Cuba, he said he also gave five talks:

Of course, it wasn’t all work; I managed to make the most of my free time, finding a baseball game to attend and spending time on the beach in Matanzas province near Varadero, one of the largest resorts in the Caribbean. I was invited to the Havana home of one of the laboratory workers and visited various other interesting and beautiful sites.
He said he also went to a restaurant "reserved for local and visiting political dignitaries, and blundered into a fire drill, during which I attempted to rescue a woman who needed no rescuing."

As for the dengue survey, Calisher wrote:

We detected antibody to dengue viruses in serum samples from a scant few people, the vast majority of whom were born before 1959, when the Cuban revolution had occurred and the island, for all intents and purposes, became isolated politically (at least from a U.S. perspective). Given these results, I suggested to the Cuban authorities that dengue likely would become a problem for them if tourists and other visitors were allowed to enter the island.

So that was it. Calisher left the island and considered his visit a success. He wrote:

Having been a longtime supporter of the independence of the Cuban people, I was enthusiastic about my visit in general and comfortable with the people I met.

But two years later, the dengue hit the fan. A first wave dengue swept Cuba in 1977 and lasted two years. Some 4.5 million Cubans were infected with the virus, Calisher wrote, "but the symptoms generally were mild, and there were no known deaths." 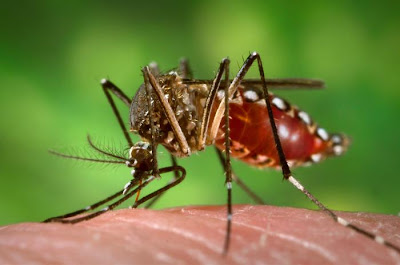 Aedes Aegypti mosquito. Source of photo: Tropisme
Calisher points out there are four dengue viruses - dengue viruses 1 through 4. All are "transmitted from person to person via mosquitoes, usually Aedes aegypti."
Much more serious, complex and deadly is dengue hemorrhagic fever. That's what hit Cuba in 1981. Calisher said 344,203 cases of dengue were reported, including 10,312 severe cases, and 158 people died. He wrote:

Exactly where the viruses came from was not clear. But instead of taking responsibility, the Cuban government falsely accused the U.S. government of ‘‘conducting biological warfare against the Cubans in the wake of a widespread epidemic of dengue-2 fever that swept the island.’’ Because of my earlier participation in the dengue research, Cuba also implied strongly that I had played a role in the epidemic.

Others picked up on the accusation and began filling in more details. In 1982, Calisher wrote, the summer issue of the CovertAction Information Bulletin, "implied I was somehow involved with dengue-based biological warfare against Cuba. The notion that I was some sort of espionage agent is ridiculous and incorrect."
State-run Granma followed with a lawsuit against the U.S. government in 1999, seeking restitution for a variety of alleged attacks. Included in the lawsuit is a statement about Calisher:

It is significant that in 1975 U.S. scientist Charles Henry Calisher, on a visit to Cuba, took an interest in and obtained information on the existence of antibodies to dengue in the Cuban population and the fact that, at least for the previous 45 years, there had been no evidence of antibodies for the type 2 dengue virus in the population.

Calisher said some pro-Cuba groups endorsed the accusations against him. The Cuba Solidarity Campaign, he wrote, "alleges that the United States was behind the introduction of diseases affecting Cuban sea-turtles, sugar cane, citrus plants, tobacco, coffee, bananas, bees, pigs, poultry, cattle, and rabbits and that the United States attempted to manipulate the weather of Cuba."
Calisher said:

...no hard evidence of actual U.S. biowarfare against Cuba has ever been presented.
For all I know, some of the charges disseminated by the Cuban government and its supporters may be true. I have no idea what U.S. biological warfare capabilities were or are; I am a microbiologist and have never worked for a clandestine organization.
Nonetheless, I recognize that many things are possible.

Calisher said it is "plausible" that the strain of dengue virus found in Cuba originated in Southeast Asia, particularly given the:

* Frequent movement of children and adults to Cuba from countries in Southeast Asia (e.g., Vietnam and Laos) and Africa at the time of the epidemics
* Thousands of Cubans who traveled between Cuba and Vietnam after 1975 to work in reconstruction projects
* ‘‘Venceremos Brigades,’’ which comprised thousands of people from all over the world who traveled to Cuba to help with sugarcane harvests
* Visitors to and from international youth festivals
* Officials attending meetings of the Non-Aligned Nations
* Return of Cubans who had fought in Algeria, Ethiopia, the Democratic Republic of Congo, and other locales
* Many thousands of people from North America who traveled by air via Mexico. 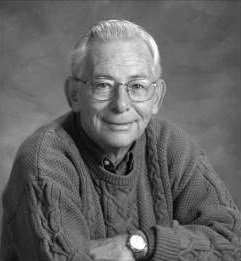 Charles Calisher. Source of photo: Liebert Online
Today Calisher works in the Department of Microbiology, Immunology and Pathology at the College of Veterinarian Medicine and Biomedical Sciences at Colorado State University. And he supports greater collaboration between U.S. and Cuban scientists. He wrote:

...an easing of the tensions between the two countries would be a huge boon for scientific collaboration in the Americas. Hostility between the governments of the United States and Cuba has had a chilling effect on such cooperation
for decades.
..relations between U.S. and Cuban scientists have been damaged by decades of hostility between the two governments. This is a shame. If U.S.Cuban relations continue to thaw under the Obama administration, perhaps productive scientific collaboration between these nations might one day be possible.

Links:
The People of Cuba vs. The Government of the United States of America for Human Damages to be Submitted to the Civil and Administrative Court of Law at the Provincial People’s Court in Havana City, May 31, 1999.
History of Plagues: Biological Warfare Waged by the US against Cuba.
Posted by alongthemalecon at 8:06:00 AM

I have been reading and looking for American scientist accused of spreading dengue fever in Cuba and is amazing and disturbing how many blogs related to buy viagra are in the web. But anyways, thanks for sharing your inputs, they are really interesting.