Cuba experts at odds over importance of Yoani Sanchez 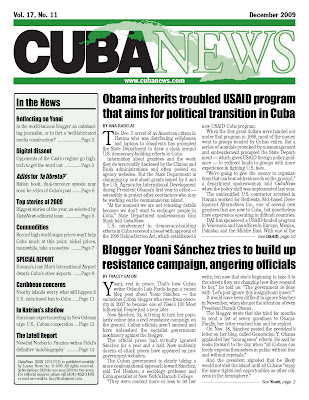 CubaNews
I wrote a story about Yoani Sanchez for the December issue of CubaNews. Thanks to those sources who helped provide information. This includes Ted Henken, a New York professor whose blog is called El Yuma; Ernesto Hernandez Busto, creator of the blog Penúltimos Días; and Cuban-born Nelson Valdes, a University of New Mexico professor who created and directs the first university computerized data base on Latin America.
Henken told me the Cuban government is taking a more confrontational approach toward Sánchez. He said:

They were content more or less to let her write, but now that she’s beginning to take it to the streets they are changing how they respond to her. The government is done with ‘Let’s just ignore this insignificant insect.’

Hernandez Busto said he believes that Sánchez is emerging as a leader of what “is looking more and more like a civil resistance
campaign.”
He said Barack Obama’s recent decision to answer the blogger's letter to him was “a very important event, a key acknowledgement that will force the Cuban government to say, ‘Yoani is Obama’s mercenary,’ demonstrating its lack of interest in any kind of serious dialogue."
But Sánchez isn’t a “mercenary,” Hernandez said, calling such an accusation completely false. He said:

The charge of ‘mercenary’ is a fallacy spread with malicious intent and it is not at all original. They’ve used it against all the dissidents throughout the history of the revolution.

Yoani Sánchez is totally meaningless as far as the political fate of Cuba is concerned. The fact that Obama or someone else in
the U.S. government pays attention to Yoani only indicates that U.S. foreign policy is in complete disarray. Apparently there are those who truly believe that Twitter and the Internet change political systems.

The story is long, but even then I couldn't squeeze in every comment.
Click here for Hernandez Busto's complete response to my questions about Yoani Sanchez, the controversial Cuban blogger.
Go here for Nelson Valdes' full response.
Ted Henken has been writing regular posts on the Cuban blogger saga, including this post on Yoani Sanchez.
Link:
Along the Malecon's Yoani & other bloggers page
Posted by alongthemalecon at 2:59:00 PM