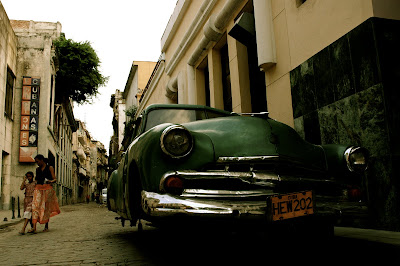 Judging from the hood ornament, I figured this was a 1953 Ford. But Rob Bostelaar, author of the Caristas blog, sent a message saying it's not a Ford. It's probably a 1951 Dodge. Lesson learned: You can't judge a car by its hood ornament, at least not in Cuba.

Richard Doody has a great collection of classic car photos. I sometimes browse his photo gallery to learn more about the 1950s-era American cars that I always see in Cuba. But I still have trouble figuring out what's what.
I've known Cubans who can glance at just about any American car on the street and rattle off its model and year. I've never been able to do that. 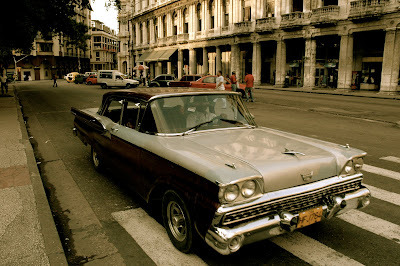 The car above is a 1959 Ford Fairlane, says Bostelaar, a vintage American car aficionado in Ottawa, Canada. He's been to Cuba and is good at figuring out what's rolling around out there.

considered by many to be the most beautifully styled Fords ever built with their long, low bodies, swept-back rear fender lines, flat, sculptured front fenders with dual headlights and exceptionally flat hoods. The Fairlane 500 Skyliner was so impressive at its 1957 introduction that President Dwight D. Eisenhower ordered an early model.

Links:
Caristas blog - everything you want to know about the classic cars of Cuba
Along the Malecon's Vintage cars & motorcycles page
Photographer Dan Heller's Cuba cars page
Posted by alongthemalecon at 8:49:00 PM

Tracey, I'm pretty sure the top car is a 1951 Dodge, the hood ornament notwithstanding. A lot of trim pieces get swapped around in Cuba, adding to the fun for car-spotters. The lower car is a fine example of a 1959 Ford Fairlane 500. Nice shots!

Thanks for your expertise... I realize now it's silly to try to identify a car in Cuba based only on the hood ornament. A lot of these cars are hybrids... Happy New Year!

The classic cars are really awesome. The vintage, Ford are one of the best classic cars. They have very unique style and they really look awesome.carinsuranceclassic.co.uk

1959 Fairlane is the most sophisticated car for me. Mom always imagines herself going out of the car with her 60's outfit on going to a ballroom. I could certainly imagine her like Monroe! Because of our creative imagination, she then decided to look for a car dealer Indianapolis to purchase the car. Indianapolis auto dealerships went fine. Now we had put our imagination into reality!