The U.S. contractor detained recently in Cuba was passing out laptop computers, cellphones and "other communication equipment," news reports said.
I wonder what "other communication equipment" means?
Cuban customs authorities do not allow tourists to bring in walkie-talkies, GPS devices or satellite phones, a Cuban government Web site says.
I don't know if there are any specific regulations prohibiting smart phones that are activated in such countries as Mexico. I would imagine that some U.S. officials would love to flood Cuba with those, although the costs would high because of roaming charges.
Perhaps U.S. officials hope to distribute some other kind of communication equipment.
The U.S. government and its contractors have managed to pass out hundreds of thousands of short-wave radios in Cuba over the past decade, so it's not inconceivable that they could distribute mass quantities of electronic equipment.
According to the Internet and Democracy blog, researchers Gwendolyn Floyd and Joshua Kauffman:

have developed a device that allows for the rapid copying of flash drives without the need for a computer. This means that data on flash drives can be copied during a taxi ride, for example. The device also includes a small LCD screen and a built-in speaker. It can be operated using batteries and/or solar power. In addition, the device can be plugged into a television to watch video clips since there are virtually no computers in Cuba while one in five Cubans own a TV. 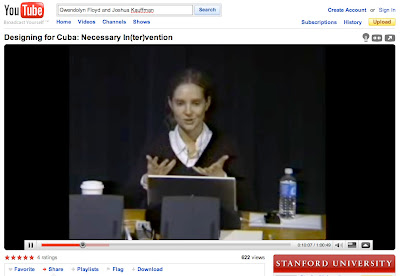 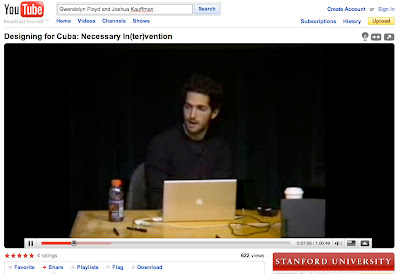 Joshua Kauffman
Floyd and Kauffman recently carried out a field study in Cuba. A YouTube of a lecture they gave at Stanford University is here.
The Internet and Democracy blog said when they were in Cuba:

they decided to put a sign up “Free Internet Access Available Here” in a marginalized neighborhood. People knew what the Internet was and suggested they take the sign down with haste lest they get in trouble.

They concluded that Cubans:

are not prepared to take on the responsibility that comes with democratic action and activism simply because the idea is particularly foreign to Cubans given the long history of state control. Understanding the local culture and history is absolutely critical before introducing any type of “liberating technology.”
In Cuba’s case, the question is how to promote small “d” democracy? How does one ready a people for small “d” participation? Another question is whether technology that facilitates information dissemination increases incentives to engage in activist events because of the assurance that these will be widely distributed?

Those are good questions. Meantime, the technology to boost digital activism races forward. Among the intriguing developments is the open-source software FrontlineSMS, which can turn a laptop and a cellphone into a central communications hub. The software's Web site says:

Once installed, the program enables users to send and receive text messages with groups of people through mobile phones. What you communicate is up to you, making FrontlineSMS useful in many different ways.

* does not require an Internet connection.
* works with your existing plan on all GSM phones, modems and networks.
* is laptop-based so it can be used on the road or during power outages.
* stores all phone numbers and records all incoming and outgoing messages.
* is scalable. Messages can be sent to individuals or large groups.
* enables two-way communication, useful for fieldwork or during surveys.
* is easy to install and requires little or no training to use.
* can be used anywhere in the world simply by switching the SIM card.

All the information "lives on a local computer, not on servers controlled by someone else," Frontline says.
Cuban bloggers would love something like that, I suspect.
The government would not.
Note: A speakers list identified Floyd and Kauffman as co-founders of "REGIONAL, an interdisciplinary design and research office that performs and applies original analysis of global society, culture and commerce, uncovering and developing opportunities for profitable innovation and meaningful cultural intervention."
I do not know what the two are doing now. The REGIONAL Web site was down when I checked it today.
Posted by alongthemalecon at 2:34:00 PM

Thanks for the comment. I am sure there is much going on in Cuba and in Washington on the technology front that we ordinary folks know nothing about.

Interesting reaction by the people to the sign saying "Free Internet Access".
I should say, though, that the advice they received urging them to take the sign down before they got into trouble probably would have happened in a marginalized barrio in lots of third world countries.

yeah, especially if people feel like it's a trick