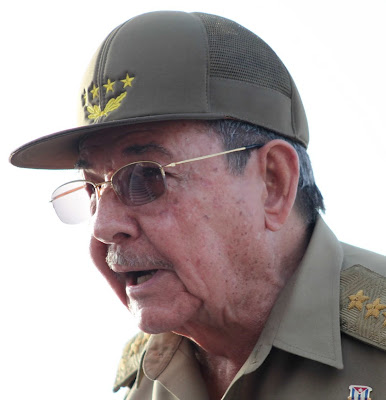 Raul Castro
Raul Castro on Sunday warned the United States to stop meddling in Cuba's internal affairs. He said the recent detention in Cuba of a U.S. contractor shows "the United States won't quit trying to destroy the revolution and bring a change to our economic and social regime," the Associated Press reported.
Castro told Cuba's national assembly:

In the last few weeks we have witnessed the stepping up of the new administration's efforts in this area. They are giving new breath to open and undercover subversion against Cuba.

Castro did not name the U.S. contractor, but said he was "working to illegally distribute sophisticated methods of satellite communication to members of the 'civil society' which they hope to form against our people."
The Cuban Colada blog quoted Castro as saying:

...there has been a concerted anti-Cuban campaign orchestrated by the American establishment with the aid of the major communications media for the purpose of showing that repression increases in this country. To this end, they organize and incite their antipatriotic hired hands to increase their provocative activities in our streets, and they even arrange for the international press and diplomatic officials to accompany them...in an open challenge to international conventions... I counsel the former and the latter to cease all provocations of any type.
I will repeat to them, stated very softly just so they won't say that we're threatening anyone – I only want to repeat my advice, to the former and the latter, to cease all provocations of any type.
...I take this opportunity, because we have stated it on several occasions right here, to restate Cuba's sincere willingness to definitively settle its differences with the United States, starting from a respectful dialogue, between equals, on any issue, without detriment to our independence, sovereignty and self-determination. If the U.S. government really wishes to move forward in its relations with Cuba, I recommend that it abandon the conditions of a domestic nature that it attempts to impose upon us, issues that only us Cubans are entitled to decide.
May these statements serve as a reply to the recent declarations made by Secretary of State Hillary Clinton about Cuba.

The text of his entire speech, in Spanish, is here.
Link:
Along the Malecon's Raul Castro, military & domestic affairs page
Posted by alongthemalecon at 10:40:00 PM