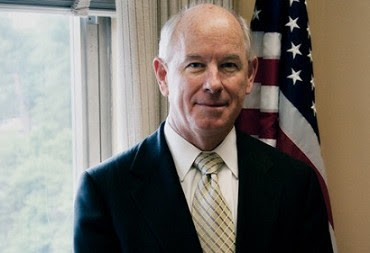 Philip Crowley
Philip J. Crowley, a State Department spokesman, made a vague reference to the communication equipment U.S. officials want to distribute in Cuba, saying officials want to help Cubans "communicate globally."
That means getting around state-controlled media in Cuba.
Here's the exchange Crowley had with a reporter during a Dec. 15 briefing:

MR. CROWLEY: Regarding our work on civil society in Cuba, it obviously is important. The United States policy is to encourage improved human rights conditions. That includes respect for fundamental freedoms, democratic reforms in Cuba, the ability of Cuban citizens to participate freely in civic life and to promote the free flow of information both into and out of that country.
Again, going back to what the Secretary said yesterday in her speech, it is about promoting the ability of people to organize, to communicate around the world. And when you do have countries like Cuba or countries like China that are afraid of that flow of information, in fact, it is inconsistent with the global trends that are going to propel the 21st century.

QUESTION: Do they define specifically what kind of communications equipment can be given to people?

QUESTION: No. Do we? I should say the United States.

MR. CROWLEY: I think our – part of our programs are centered on providing and helping groups provide a capability to network and to communicate.

MR. CROWLEY: I think it is the ability to communicate globally.
Posted by alongthemalecon at 9:04:00 AM

Any illusions people may have had that Obama's Cuba policy would be fundamentally different than that of Bush's are plainly dashed. One can not have a respectful dialogue when the USA is sending operatives to undertake these kinds of activities. Ah, well, at least it's not as bad as the introduction of swine flu, or the planting of bombs in the capital, or the landing of troops at Playa Girón, or....

Zacaman,
I thought, foolishly perhaps, that Barack Obama would promote significant changes in U.S. policy. But I don't see that any big changes have happened at all. An array of government programs are in place and are moving forward. These programs have an inertia of their own, and can't be stopped easily. Tracey

I did some additional reading - the DAI funding was awarded in 2008, prior to Obama becoming president. The Bush/Cheney effect will last for some time yet, it appears.

This doesn't let Obama off the hook - he has made, in my view, errors in his handling of "the Cuba issue", using the same unfortunate rhetoric that will make any rapprochement with Cuba difficult.

Zacaman,
Thanks for the information. I agree Obama has taken the wrong path if he wants a new relationship with Cuba. We'll see what happens. Tracey