Stuck in the Cold War muck 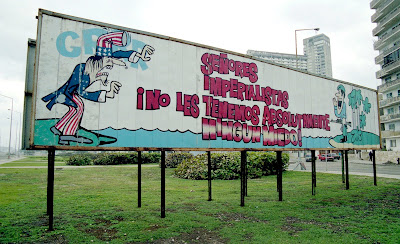 The billboard reads: Mr. Imperialists. We have absolutely no fear of you.
"Is the honeymoon over?" Anya Landau French asked on the Havana Note blog on Dec. 21. Then she quickly answered: There never was much of a honeymoon in U.S.-Cuba relations after Barack Obama took office.
Landau French, research director of the U.S.–Cuba Policy Initiative at the New America Foundation, wrote:

Plenty of Cuba watchers believe that Cuba does not want engagement with the United States, and will do anything to sabotage real progress.

But I'm not convinced that this is about sabotage, because I truly don't think there was much progress to sabotage. ...merely rolling back some (and by no means all) of the Bush Administration's more antagonistic policies toward Cuba, and not addressing the fundamental tensions in the policy, does not a "new beginning" make. 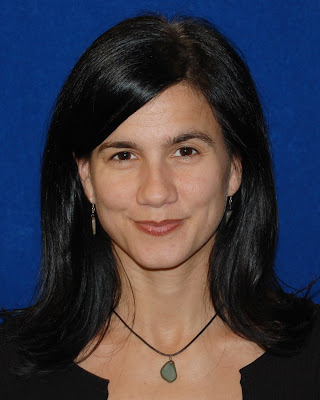 Anya Landau French. Photo credit: New America Foundation
Landau French is on target. The Obama administration has taken only baby steps toward improved relations. At the same time, some U.S. government agencies continue developing or carrying out plans to promote regime change.
If this is a carrot-and-stick approach, the Cubans see lots of stick and not much carrot. The two sides remain far apart with no signs of reconciliation.
After Obama took office, I suggested something radical - sending Michelle Obama to Cuba as an emissary of good will. I figured a visit to Cuba just might inspire the First Lady to push for improved relations between the two countries. I see now that the idea was unrealistic. 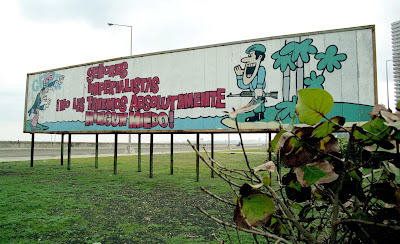 Complicating things, the rhetoric on both sides of the Florida Straits has heated up. Just a few weeks ago, Barry McCaffrey had planned to travel to Cuba in early January. But now that trip is off. The retired general took offense at comments by Bruno Rodríguez Parrilla, Cuba's top diplomat at the United Nations, Cuban Colada reported.
On Dec. 21, Rodriguez said Obama is "imperial, arrogant, doesn't listen, imposes conditions and even threatens the developing countries."
McCaffrey, who wants to lift the Cuba travel ban, said in response:

This type of shallow and vitriolic 1960s public diplomacy also makes Cuban leadership appear to be non-serious, polemical amateurs. President Obama is the most thoughtful and non-ideological U.S. Chief Executive that the Cubans have seen in 50 years. This Foreign Minister Rodríguez speech probably slammed the window shut on U.S. Congressional and Administration leaders being willing to support bringing Cuba back into the community of nations.
This situation makes me very sad for the Cuban people. I see little reason to visit Cuba and deal with leadership of this appalling lack of good judgment. Please withdraw my name for the proposed visit to Cuba in January.