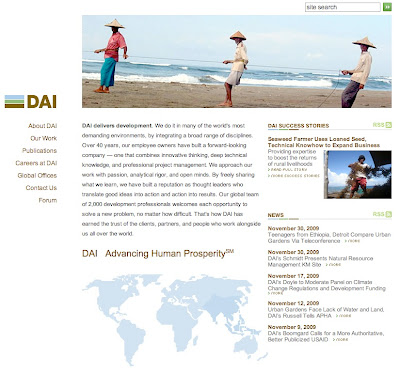 DAI is based in Bethesda, Md.
The Dec. 5 detention of a U.S. contractor in Cuba underscores the difficulty that U.S. government-financed groups will have in trying to carry out pro-democracy work on the island.
The worker, an employee of Development Alternatives Inc., or DAI, has not been identified and the company did not respond to a request for comment, the New York Times said.
The employee "was distributing cellphones, laptops and other communications equipment in Cuba on behalf of the Obama administration," the Times reported on Dec. 11.
My guess is that the contractor's work could be traced back to the Office of Transition Initiatives. The OTI is part of the U.S. Agency for International Development and has financed DAI work in Venezuela.
DAI set up an office in Caracas known as VICC, or Venezuela: Iniciativa para la Construcción de Confianza.
DAI employees have worked in more than 150 countries since 1970, according to the company's Web site, and has dozens of experts in many fields.
The Times said:

It was unclear exactly what the company’s employee was doing at the time he was detained.
Cellphones and computers are available for sale in Cuba, prompting some to question why Cuba decided to crack down on an activity that has long been treated as more of an annoyance than a crime. When it comes to satellite phones, however, the Cubans have taken a far harder line.

It's true what the Times says about satellite phones. I brought a satellite phone to Cuba to ensure reliable communication during Pope John Paul II's historic trip to the island. I had to pay the Cuban government a hefty fee - something like $2,000 - to use the phone during a three-week period. And Cuban authorities made sure I left the country with the phone.
In this case, perhaps the U.S. contractor had something else: smart phones activated in Mexico or another Latin American country. Such phones would allow a Cuban blogger to surf the Web and send messages, photos and videos without going to a hotel or foreign embassy to connect to the Internet.
I could see Cuban officials objecting to something like that.
Link:
More on OTI work in Cuba.
Posted by alongthemalecon at 6:28:00 AM

"underscores the difficulty that U.S. government-financed groups will have in trying to carry out pro-democracy work on the island."

Agents of the U.S. government - direct or by proxy - are *not* engaged in pro-democracy work. They are engaged in internal destabilization efforts. "Democracy" is not the aim: a transition, by any means possible, to a multi-party system through which the U.S. could identify and support "friendly" elements (such as occurred with Chamorro in Nicaragua) is the plan.

One may criticise Cuba's electoral system, one in which all political parties (including the Communist party) are banned from participating, but one must also appreciate the significant degree of popular participation - aka "direct democracy" that exists.

Nothing the U.S. does in Cuba is altruistic. The agenda is regime change, and the activities are internal interference.

Zacaman, thanks for your comments. Tracey