A recent blog headline caught my eye: CIA AGENT CAPTURED IN CUBA. The story claims that Development Alternatives Inc., or DAI, is a "CIA front organization."
DAI A DAI subcontractor employs a man who was captured earlier this month in Cuba, where he was distributing cellphones, laptops and other communication equipment.
The accusations of CIA ties seem premature and perhaps unfounded. Is there really any evidence for that claim? I haven't seen any.
In any case, the U.S. government does not need to cloak its Cuba operations with CIA fronts. The U.S. Agency for International Development does not hide its overall goal of undermining and subverting the Cuban government.
Such work might have been top secret 20 years ago. But today, much of it is outsourced to such private companies as DAI, some of which receive multimillion-dollar U.S.-government contracts.
U.S. officials call it "pro-democracy" work. Foes of such programs say it's "subversion," blatantly illegal attempts to topple a foreign government. Nelson Valdes' article - The Buying of "Democracy" Agents in Cuba - gives an explanation of that view. 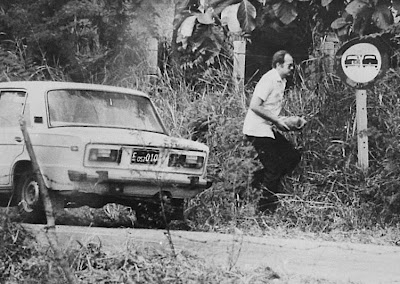 Here's U.S. Interests Section employee Richard Michael Brennan dropping off supplies for Cuban dissidents in the 1980s. Brennan hid the supplies in a hollowed-out rock.
There are many unanswered questions about the U.S. government contractor's detention in Cuba. The New York Times said:

American officials said they were encouraged that the Cubans had not publicized the detention, and they said they were hopeful that he might be quietly released.

How the Cubans handle the case will reflect their current view of U.S.-Cuba relations.
I can't see Cuban officials quietly releasing the man unless they are eager - and almost desperate - to hold talks with the U.S. or work toward normalizing relations.
The U.S. contractor is too valuable to simply release. Cuban officials will want to squeeze maximum political benefit from this episode.
It would not surprise me to see them publicizing the man's arrest with a splash at some point: A detailed account of his activities unveiled on the Mesa Redonda along with banner headlines in Granma and Juventud Rebelde. That would also give ammo to pro-government bloggers.
State-run media may also bring the Cuban Five into the debate, particularly if the Cuban government goes with the view that the U.S. contractor has CIA ties.
Whatever approach the Cuban government takes, authorities will build a case against the U.S. contractor, interviewing people he met and reconstructing his time on the island, from the moment he stepped off the plane until he was taken into custody. 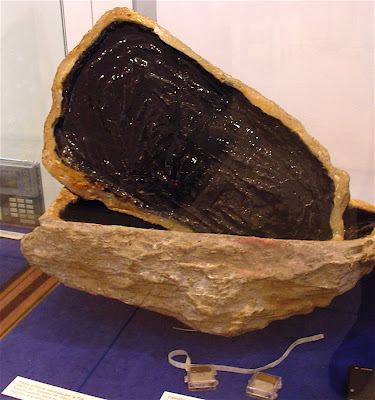 The hollowed-out rock is on display at the Interior Ministry museum in Havana.
Link:
Along the Malecon's Spy vs. spy page
Posted by alongthemalecon at 8:21:00 AM

Nice write up on this case and I fear that you are right about the Cuban government using this to their advantage - especially given that he was handing out computers and cell phones (two tools in the arsenal of Cuba's independent bloggers) and given the fact that Cuba's 5 spies/"heroes"/"prisoners of empire" were doing something quite similar in the US.

This case gives me a sinking feeling as it seems taylor-made for the Cuban propaganda machine. Which is one reason that I favor dropping the whole embargo - just let anyone travel to Cuba and give cell phones and computers to whoever they please. That surely is not a crime nor subversion. But if the computers and phones are actually bought and paid for by Uncle Sam it kind of undermines those who receive them. Plus, it becomes that much easier for the Cuban Government to disqualify them as "lackeys of imperialism" (ture or not).

I once spoke to Dagoberto Valdes, editor of the former independent magazine Vitral (now on-line as Convivencia), and he told the US when they asked him how they could help - "If you really want to help me - I ask that you do not help me at all."

Most of this new generation of bloggers seems to know that their credibility lies in part with their independence and authenticity - granted they must rely on some foreign support since the Cuban government will not allow their blogs to operate on a Cuban server (.cu) - but to be credible that support must come from a grass-roots effort by citizens of various countries who favor their cause - hosting and maintaining their portals and sites outside of Cuba, translating, aiding with flash drives, disks, computers, cell phones, etc. NOT from foreign governments - and especially NOT from the US government whose track record of subversion and international bullying only taints those it seeks to help.

"are right about the Cuban government using this to their advantage"

What "advantage" would that be? How advantageous is it to Cuba that it continues to be on the receiving end of destabilization efforts by the USA, efforts that stretch back five decades and have included terrorism, biological warfare and outright invasion? How is Cuba the "bad guy" in this scenario?

"and especially NOT from the US government whose track record of subversion and international bullying only taints those it seeks to help."

The US government does NOT seek to "help" Cuba. They may put it into those words, wrap it up in pretty phrases of "liberty" and "democracy", but the ultimate goal is destabilization, an attempt to externally modify Cuba's political and -more importantly- economic system.

Who appointed the USA as moral guardian of the hemisphere? Cuba has its problems - but Cubans alone (and by that I mean Cubans, not those living in the belly of the enemy) should be responsible for fixing them.

My personal and professional experiences on the island since the early 1990s inform my opinion that life in Cuba is difficult - but a helluva lot better than it is here in Mexico (or any Latin American nation) for the vast majority of people.

"Human Rights" means many things... access to the internet is not yet enshrined in the U.N. Declaration. But health care, food, shelter... things that Cuba provides to its people are as valid Human Rights as the right to twitter "fire" in a crowded theatre.