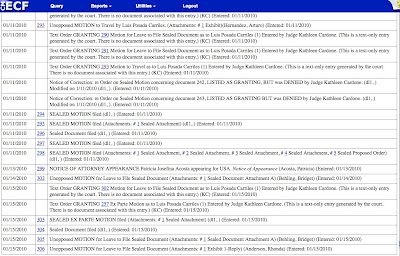 Motion to seal granted
The prosecution of Luis Posada Carriles is increasingly shrouded in secrecy. Kathleen Cardone, a U.S. district court judge and George W. Bush nominee, has allowed dozens of documents to be sealed before the public has a chance to see them, making it difficult for anyone to get a full picture of the legal proceedings.
An unscientific measure of the extent of the secrecy: The word "sealed" appears more than 230 times in the electronic docket report from January 2007 to January 2010.
Prosecutors want to limit, among other things, references to Posada Carriles' service as a "paid asset" of the CIA.
The prosecution and the defense are at odds over just how long Posada Carriles worked for the CIA and in what capacity, a Jan. 10 court document shows.
The U.S. government's UNCLASSIFIED SUMMARY OF THE CIA’S RELATIONSHIP WITH LUIS CLEMENTE POSADA CARRILES states:

The Central Intelligence Agency’s first contact with Luis Clemente Posada Carriles was in 1961, in connection with planning for the Bay of Pigs invasion. Posada was a paid asset of the CIA from 1965 to 1967 and again from 1968 to 1974. From 1974 to 1976, CIA had intermittent contact with Posada, primarily to resolve outstanding financial matters. During that same period, Posada occasionally provided unsolicited threat reporting, including information regarding a bombing threat against a June 1976 flight from Panama to Havana. That information was promptly disseminated by CIA to intelligence, law enforcement, and foreign policy agencies.

CIA had an additional contact with Posada in 1993 when CIA anonymously contacted him in Honduras by telephone to warn him about a threat against his life.

But, prosecutors say, Posada Carriles' regular ties to the CIA ended in 1976. To bolster that argument, they filed his CIA secrecy oath. Posada Carriles signed the document, which is dated Feb. 13, 1976 and says he was ending his association with the CIA. 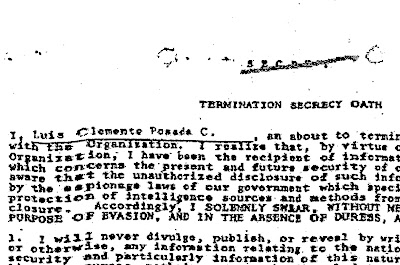 His past CIA connections are "irrelevant," prosecutors add.

Two more reasons why the prosecution might want to limit questions over Posada Carriles' CIA past:

1) Posada Carriles may claim that he falsified immigration papers, had fake documents or lied to immigration authorities because his CIA work required it.
2) Evidence that the defendant's CIA ties stretched into the '90s or beyond could embarrass U.S. officials who claim he no longer has government ties.

The trial is set to begin on March 1.

Link:
Along the Malecon's Anti-Castro militants page
Posted by alongthemalecon at 4:16:00 PM