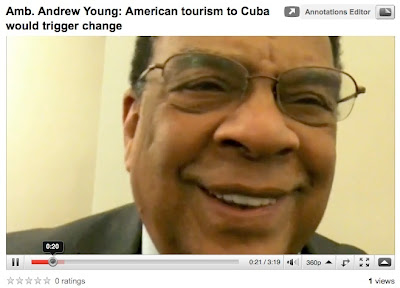 iPhone video on YouTube of Andrew Young inteview
American tourists would do more to change Cuba than economic sanctions and diplomatic isolation, said Andrew Young, the former U.S. ambassador to the United Nations.

Young told me on Wednesday he's no fan of communism, but doesn't believe the longtime U.S. ban on trade with Cuba is the best way to promote a democratic transition.

I asked if he believes the United States ought to move toward normalization of relations with Cuba. He said:

Oh, a long time ago. If we had done that 50 years ago, Castro would have been overturned. Cuba wouldn’t be maybe a democracy, but it would sure be a wonderful, prosperous, capitalist place.

We didn’t have to recognize them. If we just let tourists go. The power of Americans traveling around the world. We did this to Russia. When I was mayor of Atlanta, we sent 3,000 Atlantans to Soviet Georgia, to Tbilisi. And it’s no accident that Georgia was one of the first to split off from the Soviet Union.

Now we also brought 300 Soviet Georgians back to live in our homes in Atlanta. Just the contact, back and forth, helped to change Russia. And if we can change Russia, we can sure change Cuba.

I don’t like communism and…I can remember when we thought Mandela was a communist. The only places where we have not made progress are places where we isolate and boycott people completely: North Korea, Iran, Cuba, and Zimbabwe.

I mean, Gaddafi probably is not all stable. I would say that Gaddafi is less intelligent and less stable than Castro. But when we started working on him, we at least stopped him from blowing up planes. And we do a significant amount of trade with Libya. So if you can work with Gaddafi, you ought to be able to work….

I’ve been asked by a group of Korean Presbyterians if I would lead a delegation to North Korea this summer. And if my health is still holding up and things don’t change otherwise, I probably will because it’s a Korean group that sends food to Africa. And they were meeting with me because they were sending food to Haiti. And they asked me to come to their convention in August. And they’re going to take a caravan of 18-wheelers filled with food and medicine and trees to North Korea. I said I’d be glad to go with them.

Link:
Along the Malecon's U.S.-Cuba relations page
Posted by alongthemalecon at 9:44:00 PM

Sorry, but Amb. Young is an idiot. First he claims that a hypothetical non-democratic but (capitalist) Cuba would be a "wonderful" place. Then he takes credit for the fall of the Soviet Union, because some Atlantans went to Tiblisi... some nerve.

Of course he is right about the utter failure of our Cuba policy, but that is not exactly going out on a limb.

Interesting that Andrew Young want to go visit North Korea. There is an interesting article by Christopher Hitchens on Slate.com about North Korea written a few days ago.

The article is largely about North Korean propaganda on racial superiority, and how the North Korean people have bought into it and believe they are superior to other societies.

I bring this up because he mentions the shocking racist experience of a Cuban diplomat in North Korea. Well worth a read.