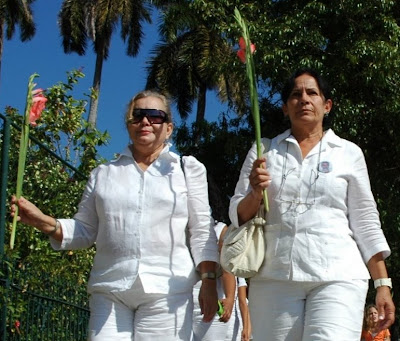 U.S. lawmakers who want regime change in Cuba urged the Obama administration on Friday to keep pro-democracy funds flowing into the country.
This comes just three days after Obama asked for $20 million for pro-democracy and other work in Cuba.
It's clear there's no desire to stop spending money. But there's some uncertainty over just what to do with it, particularly since the Dec. 4 arrest of a U.S. subcontractor in Cuba.
Capitol Hill Cubans posted the lawmakers' letter this morning. It is addressed to Secretary Hillary Clinton and reads:


We are greatly concerned about the manner in which the Administration is handling the arrest of Alan Gross, the American citizen who has been incarcerated in Cuba without charge since December 4th, and the consequences of his arrest on U.S. democracy assistance programs.

It appears that the Administration has opted to handle Mr. Gross’ arrest by trying to appease the Cuban dictatorship. The U.S. Agency for International Development (USAID) has gone so far as to discourage democracy assistance grantees from traveling to Cuba to provide aid to members of Cuba’s independent civil society and is surveying grantees about whether it is possible to provide assistance without having to travel to Cuba. Furthermore, USAID has yet to announce the solicitation for new grant proposals for the disbursement of FYs 2009 and 2010 democracy assistance funding, despite the requirement of the law. In fact, non-governmental organizations (NGOs) have been informed that the Administration is considering taking democracy assistance funding in a “new direction.”

Just this week, we were informed that the State Department will proceed with the scheduled “migration talks” with the Cuban dictatorship on February 19th. It is unsettling for the State Department to be proceeding with “migration talks” and to have, in effect, suspended on-island assistance programs, while an American citizen continues to be under arrest in one of Castro’s prisons and human rights activists on the island are in urgent need of humanitarian aid. This policy of acquiescing to the wishes of the Cuban dictatorship emboldens and encourages it to prolong Mr. Gross’ incarceration in the hopes of obtaining further concessions from the United States.

We urge you to suspend all talks with the Cuban dictatorship until Mr. Gross is freed, and that you demand that he be immediately released. We also respectfully request that you call on USAID to proceed swiftly with the solicitation process, as called for by U.S. law, so that all interested non-governmental organizations may submit grant requests to provide needed assistance to Cuba’s pro-democracy movement.

Thank you for your attention. We look forward to your prompt response.

Link:
Along the Malecon's U.S.-Cuba relations page
Posted by alongthemalecon at 2:43:00 PM