Cartoonist is MAD about Cuban cigars (especially the box) 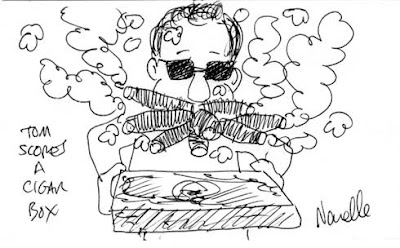 Cartoon by Brian Narelle
Tom Richmond, a MAD magazine illustrator, went to Cuba recently and hoped to bring back a souvenir: an empty cigar box. He wrote:

I wanted one of the authentic wood boxes to use in the studio for pens and stuff. I had a hard time finding one, so I bought a box of 10 cigars (Partigas No. 4s) which we smoked throughout the week and brought the box back with me.

So I ended up bringing three different sized empty boxes back with me. However… I made the mistake of being honest with the customs people, and they confiscated all three of my empty boxes.
I asked them if it was illegal to import GARBAGE from Cuba, and all I got back was a smart-assed answer that anything made in Cuba, garbage or not, was illegal to bring back to the U.S. I should have torn the tops off the boxes before I allowed them to toss them in the garbage, because you can bet those cigar boxes went home with some customs agent. 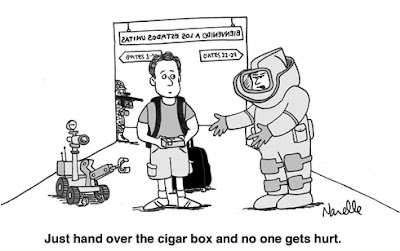 Cartoon by Brian Narelle
But it looks like Tom had a fun time in Cuba. Below is a cartoon he did for a tour guide named Mayen. 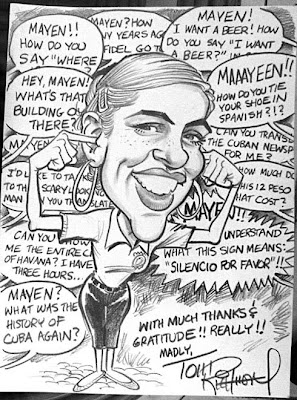 See more cartoons at Tom's Web site, called the MAD Blog.
Posted by alongthemalecon at 7:30:00 AM