Dozens more documents have been filed and sealed in recent weeks in the Luis Posada Carriles case.
This isn't new. Many of the legal proceedings in the case have been carried out in secret, making it difficult to know just what's going on in the U.S. District Court in El Paso.
Is all the secrecy justified?
Americans pay the salaries of District Court Judge Kathleen Cardone and the team of prosecutors, nearly a dozen strong. Don't taxpayers have the right to know more about how they're handling this controversial case?
No doubt, the U.S. government over the past two years has spent hundreds of thousands of dollars on the investigation and prosecution of Posada Carriles.
Don't taxpayers have the right to know more about how their money is spent? Or should we blindly trust that U.S. authorities are doing the right thing, just like we trusted George W. Bush when he told us that we needed to invade Iraq because of the weapons of mass destruction that didn't exist.
Posada Carriles is not Iraq, I know.
It's just one of thousands of prosecutions the government carries out every year. There's a spotlight on this one because of all the history and controversy over that former CIA operative named Posada Carriles, a.k.a. Ramon Medina, a.k.a. Lobo, a.k.a. Solo. 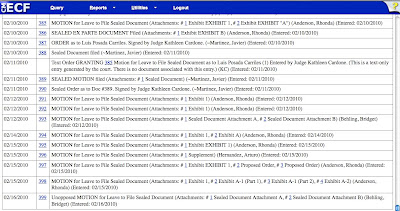 This screenshot of the online filings in the Posada Carriles case lists some of the documents filed and sealed in recent weeks.

This case makes me wonder about all the other federal prosecutions that few people care about. What goes on behind closed doors in those cases? Is justice always served? Are judges always forthright? Are prosecutors always honest? How can anyone really know?
We can't even know some of the basic details in the Posada Carriles case. Documents are filed and sealed, stowed away from prying eyes, buried somewhere, somewhere in the dark.
Posada Carriles' trial is set to begin March 1. He's accused of perjury, obstruction, immigration fraud and other charges.
Lawyers for Posada Carriles had until Feb. 16 to file their list of witnesses.
No witness list appeared this morning in online District Court records. So the lawyers either blew the deadline. Or someone decided the list should be filed and sealed like so many other documents in the case.
In case you're wondering who's responsible for all this, it starts with the judge, Kathleen Cardone. After that, I'd look to the prosecutors listed in the Posada Carriles court file. Their names and contact information are shown below:

Link:
Along the Malecon's Anti-Castro militants page
Posted by alongthemalecon at 9:07:00 AM