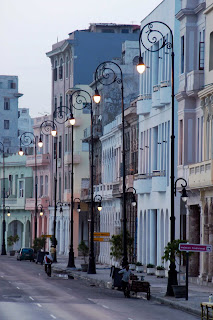 La Habana
With the December arrest of U.S. subcontractor Alan Gross, Raul Castro has "effectively forced the suspension USAID's operations in Cuba," former State Department official Phil Peters says.
The Obama administration ought to "slash or scrap USAID's Cuba program," Peters writes in Foreign Policy magazine.
USAID can't expect to have any success as long as it openly tries to undermine the government in a country with such a formidable state security apparatus, Peter says. USAID is in an impossible position, he writes, trying run a pro-democracy program "with the absurd hope that the local government will not notice."
Peters, creator of the Cuban Triangle blog, writes:


Stranger still, the program is overt in the United States -- in 2006, there was an open call for proposals for "high tech communication devices to facilitate communications between activists on the island" -- and attempts to be covert in Cuba.
That might work -- and Gross might be a free man today -- were it not for the fact that Cuba has a world-class intelligence service. At the Havana airport, passengers and baggage are scanned entering Cuba. Carry a laptop, and you can expect to answer a few questions. Carry several, and you can count on being watched. If you visit the U.S. diplomatic mission, Cuban guards see you coming and going. If you go there to pick something up -- the State Department reports that in some months, up to 75 percent of shipments to that mission come from USAID's grantees -- then the mission's 250 Cuban employees, all of whom can be counted on to be informants or employees of Cuba's Interior Ministry, will see that too.
Foreigners who phone or visit dissidents can expect to be observed. Moreover, "dissidents" aren't always who they seem -- indeed, Cuba's Department of State Security (DSS) not only monitors anti-government activists, but also manufactures some. Agents pose as opponents of the regime and infiltrate opposition organizations. When 75 dissidents were jailed after lightning trials in 2003, the DSS happily unmasked 12 of its phony dissidents, publishing interviews and then a book about their undercover exploits.

Link:
Along the Malecon's U.S.-Cuba relations page
Posted by alongthemalecon at 9:14:00 AM