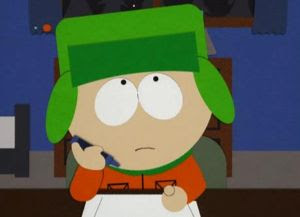 Kyle calls Fidel Castro
The U.S. government spends millions of dollars trying to force a transition to democracy in Cuba.
Kyle Broflovski did it with a simple phone call to Fidel Castro in the Dec. 13, 2000, episode of South Park.
Episode 64 is called "The Wacky Molestation Adventure." Wikipedia describes it as:


a parody of Stephen King's Children of the Corn, Logan's Run, Mad Max Beyond Thunderdome, William Golding's "Lord of the Flies" and the Star Trek episodes "Miri" and "And the Children Shall Lead."

In brief:
Cartman has four tickets for a Raging Pussies concert and the boys all want to go, but Kyle asks his parents if he can go, and, of course, his parents forbid him from going. When he tries to negotiate, Kyle's mom says (sarcastically) that Kyle can go if he cleans out the garage, shovels all the snow from the driveway and brings democracy to Cuba, all of which Kyle does. 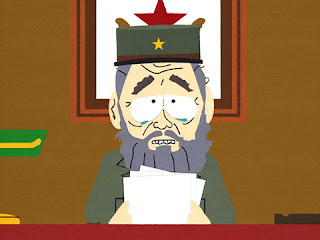 Fidel Castro reads Kyle's letter
Of course even though he completed this impossible task, which left Mr. and Mrs. Broflovski speechless when they saw Kyle being given credit on the news, Kyle's parents still won't let him go to the concert, explaining he wasn't supposed to do it, as it was supposed to be impossible.
In his fury, he questions his parents' authority and shouts out his wishes of not having parents as he leaves the house, shocking his parents. While hanging with the guys at Kenny's house, Kyle tells of his wishes that he didn't have any parents to his friends, who agree with him. Cartman suggests that he call the police and tell them that his parents have been "molestering" him, which will make them go away for a while (a trick he played on his mother's ex-boyfriend). Kyle does this and the police take his parents away.

If only things were that simple...
Posted by alongthemalecon at 5:57:00 AM