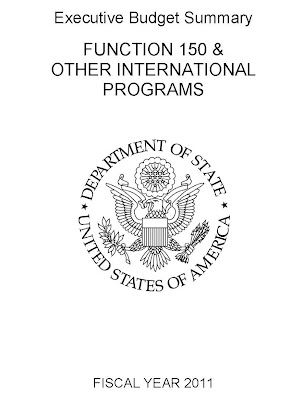 The White House budget includes $20 million for pro-democracy and other programs in Cuba. A 136-page State Department budget document, which I found on the Cuban Triangle blog on Monday, says the money:

will continue to promote self-determined democracy in Cuba. Funds will be used to provide humanitarian assistance to political prisoners, their families, and other victims of repression; advance human rights; strengthen independent civil society organizations; and support information sharing into and out of Cuba.

The Miami Herald reported last month that the U.S. government's democracy programs for Cuba were "all but paralyzed." Non-governmental groups that distribute U.S. aid to Cuba said they were running out of funds, the paper said, and their money problems began even before the Dec. 4 arrest of an American subcontractor in Havana.
The budget request shows that despite such trouble, there's no desire to stop the flow of money into Cuba.
And to be sure, basic freedoms in Cuba need a boost. But "self-determined democracy" is an odd term. How can it be self-determined if millions of dollars in U.S. funds pay for it? Once someone else is paying, doesn't that influence the outcome? It's no longer purely "self-determined."
Then again - and this is a persuasive argument - how can the Cuban people determine their fate as long as the Cuban government and party apparatus controls virtually everything on the island.
Posted by alongthemalecon at 6:44:00 AM