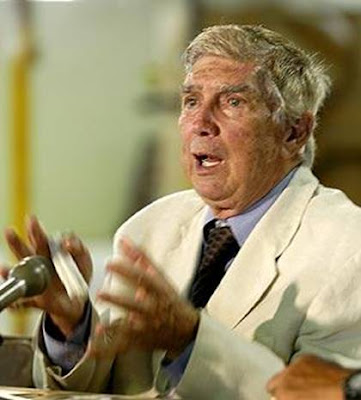 Luis Posada Carriles. Source of photo here.
Luis Posada Carriles appeared in court on Friday in El Paso. His perjury and fraud trial begins on March 1 and could last as long as two months, the El Paso Times quoted a federal judge as saying.
Upcoming dates in the proceedings:

The National Committee to Free the Cuban Five, the A.N.S.W.E.R. Coalition and other groups plan to protest at 8 a.m. March 1 in front of the U.S. Federal Courthouse at 511 E. San Antonio Ave. in El Paso.
The demonstrators will demand that Posada Carriles be extradited to Venezuela to face prosecution for his alleged role in the 1976 bombing of a Cuban airliner that killed 73 people.
The protesters, from Tucson, Albuquerque, Las Cruces and other cities, will also ask that five Cuban agents jailed in the U.S. be freed, according to the Free the Cuban Five committee.
The trial will be a circus, no doubt.
In related news, AFP reported that federal agents on Friday searched the offices of Santiago Alvarez, a Posada Carriles friend. Agents carried out the search as part of an ongoing investigation.
Alvarez, a Miami real estate investor, spent nearly four years in federal prison for stockpiling weapons and for refusing to testify against Posada Carriles.
He got out of prison in October. He and co-defendant Osvaldo Mitat pleaded guilty in September 2006 to the weapons charges. The Miami Herald reported:

They acknowledged that the arms were meant to battle Fidel Castro's totalitarian government.

The Herald said Alvarez, Mitat and three other Posada Carriles associates pleaded guilty to obstruction charges in the investigation against Posada. They refused to tell a grand jury about Posada's purportedly illegal entry into the U.S. in 2005.
I wonder if immigration agents are looking into whether Alvarez has been helping Posada Carriles lately. I don't believe that Posada Carriles is allowed to have contact with Alvarez and several other associates.
But Posada Carriles needs his friends - and their money - now more than ever.
He had planned to take a private charter jet from South Florida to El Paso for the Feb. 5 court hearing because his doctor said his health was too fragile for a long road trip.
But his lawyer told me on Jan. 26 that Posada Carriles was making other plans because the plane he had hoped to ride was undergoing maintenance.
It's not clear to me how the wound up traveling to El Paso. Anyone know?

Link:
Along the Malecon's Anti-Castro militants page
Posted by alongthemalecon at 11:54:00 PM