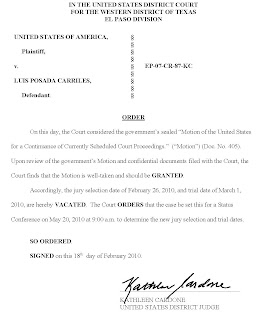 Luis Posada Carriles' perjury trial set for March 1 has been delayed once again, a federal judge said Friday.
U.S District Court Judge Kathleen Cardone gave no explanation and did not set a new trial date.
A status conference to determine new jury selection and trial dates was set for 9 a.m. May 20 in U.S. District Court in El Paso.
Prosecutors requested the delay in a sealed document. Cardone found that the government's argument - which is secret - "is well-taken and should be GRANTED," according to a one-page document filed Friday.
How can the public know whether such secrecy is justified if the prosecutors' request for a delay is sealed?
The public has a right to know more.
Delays have plagued the trial. Posada Carriles was arrested in May 2005 and the legal wrangling began.
He was indicted on perjury, immigration fraud and other charges in January 2007. A trial was set for May 11, 2007, but there was a delay, then another...
Five years will have passed from the time of his 2005 arrest to the status conference - unless, of course, there's another delay.