The return of La Rosa Blanca 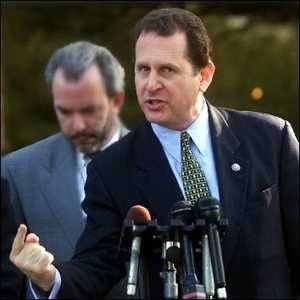 Wants to stick it to Fidel Castro
Lincoln Diaz-Balart is starting a nonprofit group aimed at supporting dissidents in Cuba.
The nine-term Republican congressman announced his retirement on Feb. 11. The Miami Herald reported:

...he does not plan to run for office in Cuba, if and when the current regime ends. But seeing a free Cuba remains his pet project, he said.

He plans to start a non-profit inspired by his father's White Rose organization, the first anti-Castro exile group, which was founded in January 1959 and aimed to support a democratic future for Cuba. His father, Rafael L. Diaz-Balart, died in 2005.

The Herald quoted Diaz-Balart as saying he planned to help dissidents on the island.

I will help the heroes in Cuba living in every municipality. Those are the people who are fighting communism day in and day out.

Rafael Diaz-Balart was Fidel Castro's classmate and his sister was Castro's wife. He opposed Castro's government from the beginning and founded the White Rose organization, La Rosa Blanca, in January 1959.

Diaz-Balart mentioned La Rosa Blanca while testifying before a Senate subcommittee on May 3, 1960:

Mr. DIAZ BALART. I want to affirm, with all my faith and all my knowledge, that Fidel Castro is the most important and most dangerous member in the Western Hemisphere of the Communist International machinery since the Russian revolution.

Senator KEATING. You don't favor the return of Batista, do you?

Mr. DIAZ BALART. We are very, very much opposed to that. We formed a movement, an underground movement, which is working very hard in Cuba, with two principal purposes -- to overthrow the dictatorship of the Communists, and to prevent any possibility of the return to power of Batista.

Mr. SOURWINE. Is that organization the so-called Blanco Rosa, the White Rose?

Mr. SOURWINE. Do you hold a position in that organization?

Mr. DIAZ BALART. Yes, Sir; I am the founder and the general secretary.

Diaz-Balart said at the time that Castro wanted to spread leftist rebellion. From his testimony:

Mr. SOURWINE. Do I understand correctly that through your organization, the White Rose, you have an information flow from Cuba to you? You get information from Cuba?

Mr. SOURWINE. Does this information give you any knowledge respecting the aims of the Castro regime as against other countries in Latin America?

Mr. SOURWINE. A provocation of what?

The White Rose name likely comes from a Jose Marti poem called, "I Cultivate a White Rose." It reads:

I cultivate a white rose
In July as in January
For the sincere friend
Who gives me his hand frankly.

And for the cruel person who tears out
the heart with which I live,
I cultivate neither nettles nor thorns:
I cultivate a white rose.

Lincoln:
We were concerned and saddened when we heard of your retirement. We thought Cuba had lost again....Now that we see "The Return of La Rosa Blanca"
we can see that you are not going to stop fighting for Cuba. The sacrifices of all that are in prison today, the ones that are suffering because of Castro, inside and outside of our country,and of those that died for Cuba have not been in vain.
You are following your father's footsteps...and we are sure that our fathers will guide and bless you from heaven.
Sincerely,

Taty,
Thank you for your comments.
Tracey