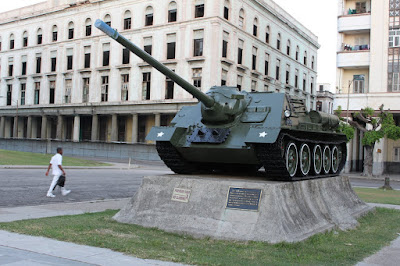 Fidel Castro used this Soviet tank to fire at the Houston transport ship during the Bay of Pigs invasion in April 1961, according to the plaque, below. 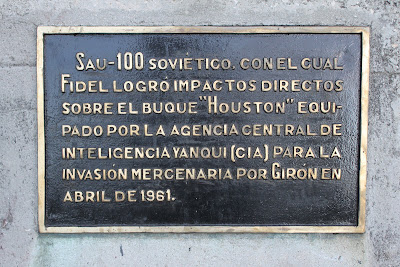 A firsthand account of a member of the invading force aboard the Houston does not mention damage from tank rounds, but rather aircraft. 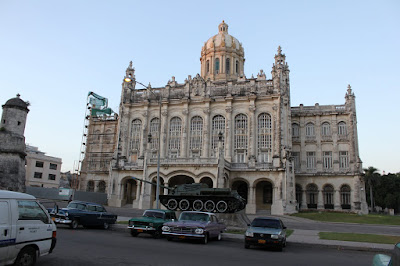 The tank is on display outside the Museum of the Revolution, the former Presidential Palace.

Link:
Along the Malecon's Revolutionary tales page
Posted by alongthemalecon at 9:08:00 PM

This tank always makes me laugh.

There is a famous photo of Fidel Castro allegedly jumping off the tank in the midst of the Bay of Pigs invasion. This is recreated in various billboards all over Cuba.

A simple google search should bring up the photo, I just did. The truth of the matter is that Fidel Castro actually arrived at Playa Giron at least 72 hours after the invasion, when most of the heavy fighting was done.

The ship in question had already been crippled by Cuban airforce strikes and was already sinking slowly. That was when Fidel decided to take some shots from the tank.

History is written by winners, and this is one chapter Cuba has written well.