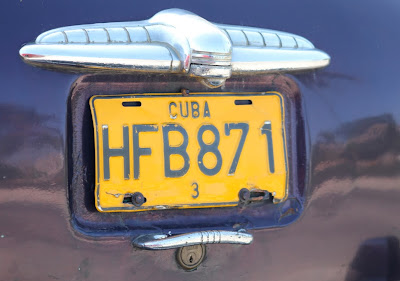 Here's a tight shot of a Cuban license plate. The Associated Press on Wednesday published a feature about Cuba's color-coded license plate system.

License plates in Cuba are status symbols. And they can reveal a person’s economic or political clout.
High-status plates – including black, white and green – give drivers a certain amount of immunity from the caballitos, as Cubans call motorcycle cops.
Orange plates reserved for foreigners sometimes trigger envy. Dark green plates belonging to the Interior Ministry can inspire fear.
Color-coded licenses in Cuba go back many years. I don’t know how it all started, but it’s pretty clear the government is interested in tracking the movement of not only cars and trucks, but merchandise, produce, people, even livestock.
Foes of the government see that as a sinister thing. Government supporters say they’re only trying to police the black market and prevent crime. 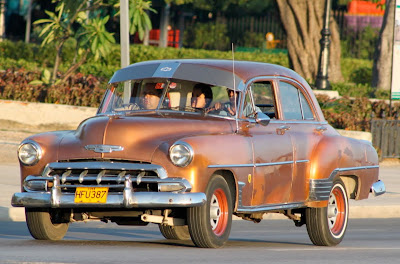 On the road
When I moved to Cuba in 2000, Cuban officials gave me a brown license plate marked PEXT for prensa extranjera, or foreign press. Later, they swapped that for an orange plate.
Driving around with foreign press on my license plate sometimes made it tough roam around neighborhoods interviewing people. A little girl who saw my Jeep’s PEXT plate once reported me to the police, I suspect. I wrote about it in 2005, saying:

In April 2003, I went to the port of Mariel to interview Cubans who might have witnessed the end of a hostage crisis. Several men had hijacked a ferry with tourists aboard and tried to reach Florida, but they ran out of gas.

Cuban authorities, including Fidel Castro himself, persuaded the assailants to turn themselves in; three were quickly tried, convicted and executed by firing squad.

I wanted to talk to neighbors to find out what they had seen. Driving into Mariel, I saw a schoolgirl grab a pen and write something down. I can’t know for sure, but I think she must have reported me because while I was interviewing her neighbors, a patrol car pulled up and officers asked me to climb inside.

They took me to a police station, questioned me for a while and let me go.

None of the neighbors would have anything to do with me after that. They were afraid.