U.S. official: Cubans can't seek their own destiny without help 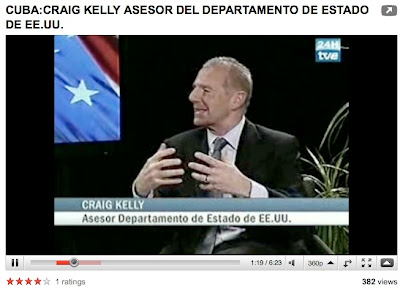 Craig Kelly YouTube video
Craig Kelly, a senior State Department official now in Cuba for another round of migration talks, told an interviewer in 2008 that says it's up to Cubans to decide their future, but they can't do that unless they have freedom.
As his argument goes, Cubans won't be free as long as the Castro brothers are in power. And the U.S. government has a duty to help them achieve that freedom.
The State Department announced Kelly's trip on Wednesday:

...U.S. and Cuban representatives will meet in Havana to discuss implementation of the U.S.-Cuba Migration Accords. The discussions will focus on how best to promote safe, legal, and orderly migration between Cuba and the United States. Principal Deputy Assistant Secretary of State for Western Hemisphere Affairs Craig Kelly will lead the U.S. delegation, which includes representatives of the agencies involved in managing migration issues.

Link:
Along the Malecon's U.S.-Cuba relations page
Posted by alongthemalecon at 12:12:00 PM

What Kelly is spouting is the typical garbage of the Yankee imperialists.

Cuba is not perfect. But at least it has a government that is socially responsible, something which corrupt capitalism never achieves.

Kelly's argument is interesting. He's telling Cubans, essentially, "It's up to you to carve out your own path. You're the master of your destiny." But we need to give you that initial nudge.
That leads to questions: Doesn't U.S. intervention, practically by definition, change Cubans' fate? And would things have been different if Cubans had been left alone to resolve their troubles?
I ask these questions not to take sides. I'm just saying...

Doesn`t anyone teach history in US high schools? American "help" in Latin American countries has meant military dictatorships, coups, disappearances and violent repression: Pinochet, Somoza, Trujillo, Rios Montt and many others. The forgotten premise of US-Cuba relations is that Cuba does not belong to the United States. Mr. Kelly should instead concentrate in "helping" the people of, say, Alabama reach their destiny and leave the Cubans alone. The US has already done enough damage there.

Thanks for your comments, Jose.