I was forced to change my route because I found it so impossible enter Cuban waters (from the U.S.), officially at least. The problem is the United States, not Cuba.

Gaveriaux left Key West on Feb. 1, windsurfing for more than nine hours toward Cuba. He said he traveled about 90 kilometers - or 62 miles - before climbing on a boat and returning to Key West.
Gaveriaux, 25, an engineer, wrote about his experience on his blog, called un ingénieur de défi or an engineering challenge. He wrote:

I'm obviously disappointed to have been deprived of arrival in Cuba this time.

He said rain and a "fickle" wind slowed him down. But he had no regrets. He wrote:

The experience has still been great. I nearly ran over a manta ray, observed a shark pass twice by my side, saw a turtle and hundreds of flying fish...
My hands are a little sore today...but otherwise I have endured this long voyage...
I will return to this passage as soon as I get a specific authorization from the U.S. authorities vis-à-vis the embargo (in the end, it's the embargo that has prevented the success of my project)... 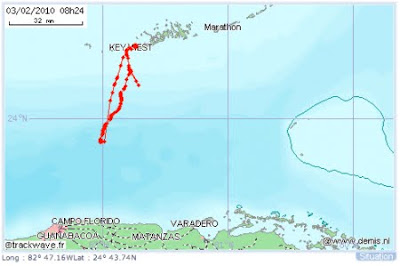 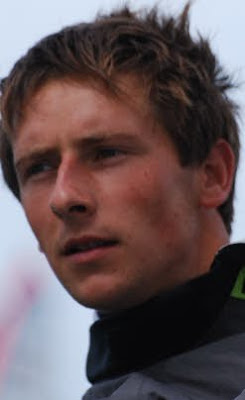 Would Martin Gaveriaux have made it to Cuba if the Americans had given him permission?
He said he considered trying to reach Cuba without U.S. permission, but decided against it. He wrote:

The alternative would be to make this journey unofficially, but the risks are many because the area is heavily guarded and that's not what I want.

Arnaud de Rosnay made the trip in seven hours in 1984. That same year, the 38-year-old tried to windsurf from China to Taiwan, crossing the Straits of Formosa. 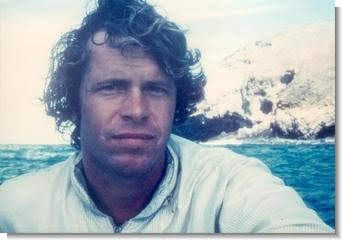 Arnaud de Rosnay. Source of photo: WindsurfingLegends.com
According to the November 2006 issue of Outside magazine:

The dashing Baron Arnaud de Rosnay—a Parisian aristocrat and heir to a Mauritian sugar fortune—planned to windsurf from China to Taiwan across the South China Sea's 100-mile Taiwan Strait. He believed this symbolic bridging of the two countries would somehow help reconcile them. The 38-year-old had already completed six other major open-water crossings by sailboard, some of them far riskier. He'd sailed from Miami, Florida, to Cuba. He'd blasted across freezing whitecaps in the Bering Strait to reach Siberia—without permission from the Soviets. He'd slipped out of ports under the cover of night to avoid military ships with orders to stop him in the South Pacific.
On Saturday, November 24, de Rosnay set sail from Quanzhou, China—an area off-limits to tourists—with two cans of orange juice, expecting to dodge Chinese warships and make land in no more than eight hours. He promised to call home as soon as he finished the crossing. He was never heard from again. 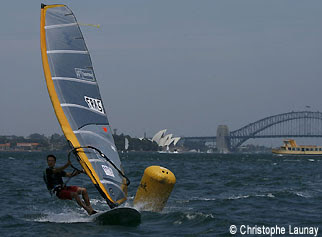 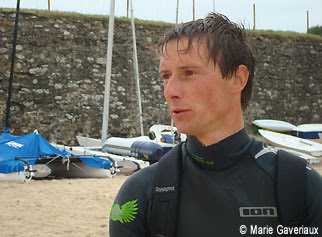 Gaveriaux wasn't born when de Rosnay vanished. He graduated from college in September 2009.
On his blog, Gaveriaux said he learned to windsurf at 8 and started competing two years later.
His Key West-to-Cuba bid coincided with the World Cup ISAF Olympic Windsurfing competition in Miami.
Here is the equipment he said he took with him on his Key West trip:

Gaveriaux blames U.S. authorities for his failure to reach Cuba. I suspect that rain and unfavorable wind may have prevented him from arriving even if he had permission. So perhaps it's not entirely fair to lay all the blame on the U.S.
I don't know where in U.S. regulations it says that a foreign citizen can't go to Cuba by sea from Florida. I'm sure it's in there somewhere, maybe something to do with leaving the U.S. without going through an official port of entry.
Posted by alongthemalecon at 6:14:00 AM

Interesting story and courageous guy in light of the windsurfer that was attacked by sharks recently.

Yeah, it's too bad he didn't make it. I love the idea that he at least tried.
I have a feeling he'll be back.