The woman behind Luis Posada Carriles 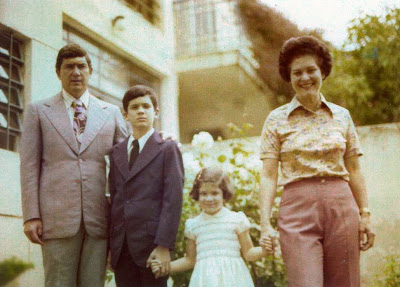 A Posada Carriles family portrait
One of the many intriguing characters in the saga of Luis Posada Carriles is his wife, Nieves, 74.
She has stuck by his side even as he's been in and out of jail, according to Ann Louise Bardach, author of Without Fidel, an authoritative and insightful book published in October 2009. Bardach writes:

During Posada's incarceration in El Paso, Nieves reappeared as his advocate - lobbying with his lawyers and fussing about his health - just as she had when he was imprisoned in Caracas. She said she was bewildering why authorities were detaining her husband.

"I don't understand how come Orlando (Bosch) got out and Luis's case is taking so long," one of her husband's attorneys recounted her saying, adding..."I think Nieves is still in love with him." 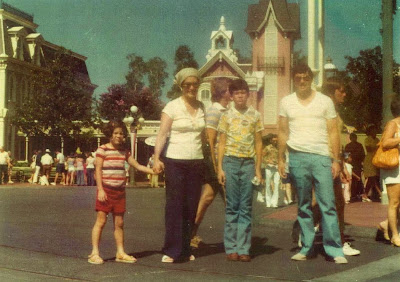 The couple's two children, shown above, are now adults. 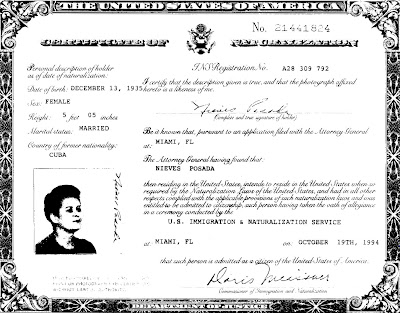 New York: March 4, 2010 (Caribbean New York Press) - A new book, “From Cubana to Santrina throws fresh light on the terrorist activities of Cuban dissident, Louis Posada Carilles, whose impending trial ( May 20) in an El Paso federal court in the United States is again attracting international media attention.
Written by New York based Guyanese Journalist Dhanraj Bhagwandin, the book highlights the trail of Bambi (one of Posada’s aliases) from Cuba to Venezuela and then to El Salvador where he was involved in drugs, prostitution and a death squad. Posada coordinated numerous plots to kill Cuba’s former President Fidel Castro and also helped the Contras in Nicaragua.
He has long been fingered as the mastermind of the bombing of a Cuban airline off the coast of Barbados in 1976 in which 73 persons perished including 11 Guyanese. Posada was on the run for nearly three decades until 2005 when he finally sneaked into the United States.
Based on interviews with Ex-Federal United States Drug Enforcement Agent Celerino ‘Cele’ Castillo III, and new declassified documents, Bhagwandin, an investigative journalist, brings a new perspective to this tragic international event involving Cuba, the United States and Venezuela.
Dhanraj Bhagwandin, the author, is a former journalist from Guyana who has covered several countries including Cuba He is also author of “Georgetown Spies” a tale of espionage involving American and Russian secret service agents. Bhagwandin also wrote for the now defunct Brooklyn Skyline newspaper and taught at York College and the Bronx Community College of the City University of New York.
The Cubana explosion in midair was the first act of terrorism in the Caribbean and Latin American.
The account reveals the genesis of the Cubana plot and the inner motivations of its author, Bambi. It also links his involvement with the American Central Intelligence Agency (CIA).
“Dhanraj Bhagwandin is the first writer of the Caribbean and North America to fictionalize the Cubana air disaster with such courage, craft, feelings and splendor,” according to Caribbean novelist Dr. Churaumanie Bissundyal.
For more information visit http://cubanatosantrina.com/
Email : caribnypress@yahoo.com

Dan,
Thanks for passing along that information. Tracey