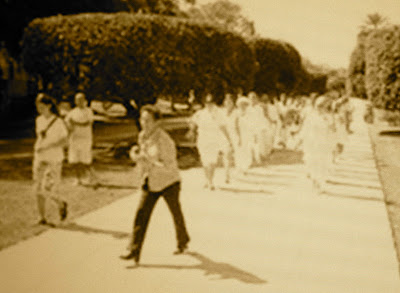 Las Damas. Photo credit: Fotos desde Cuba
Yoani Sanchez marched Sunday with las Damas de Blanco, according to Fotos desde Cuba. That looks like Yoani in the photo, above at left. I would imagine that this is the sort of thing that Cuban government supporters hope to avoid, any kind of joining of the blogger movement with traditional dissidents and activists.

Supporters of the Castro government have often weakened opposition groups by dividing them. Sanchez appears to be trying to unite the opposition. Toward that end, she yielded her space today in her high-visibility Huffington Post column to journalist Luis Felipe Rojas. He writes about the precarious health of prisoner Orlando Zapata.

Zapata was among the 75 dissidents, journalists and activists arrested during the government crackdown in the spring of 2003. He was initially sentenced to 25 years in prison. His supporters say authorities have since added charges and lengthened his sentence to 47 years, an extraordinarily long sentence in a country where manslaughter convictions can bring sentences of 10 to 12 years.

Zapata has been on a hunger strike for more than two months and his mother worries he is on the verge of dying. Marc Masferrer at Uncommon Sense has written extensively about Zapata's plight. His latest post is here. 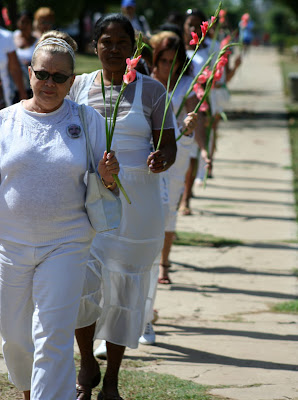 Photo credit: Boring Home Utopics
Links:
Along the Malecon's Yoani & digital revolt page
Along the Malecon's Dissidents, Ladies in White page
Cuban Ministry of Foreign Affairs explanation of the judicial system
Posted by alongthemalecon at 6:38:00 AM

Looking at the photo, I don't think the Cuban Government is scared of Yoani marching alone with the 'Damas.' If she had a following beyond the traditional dissidents on the island, then maybe. But she walks alone. She's never been able to get more than a handful of people in a room together...

And the piece in the Huffington Post was rather pathetic. It claimed the detention of Zapata was evidence of continued "racist policies" of the Cuban Government. What a pathetic attempt to pull liberal heartstrings in the HuffPo. Zapata was arrested in 2003 for the same reason as the other 74 - he collaborated with foreign governments and their paid entities. If he would have not crossed that red line, he'd still be free like the other hundreds of dissidents doing their work without contact with Washington or Miami.

Thanks for your comments.