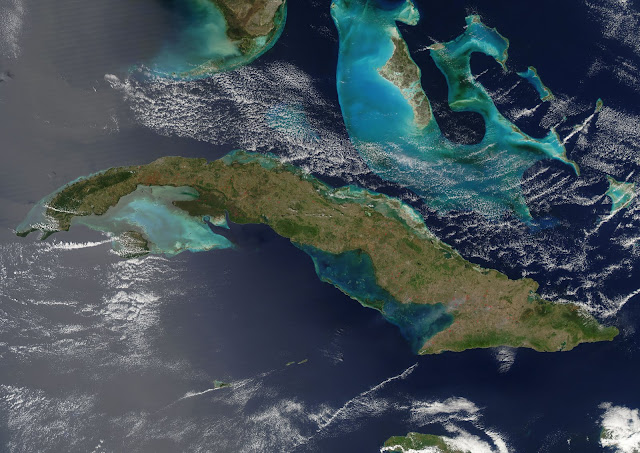 
The fires are marked in red; some of them show smoke plumes, like the one near the eastern part of the island.. Most likely this is a mix of relatively small and are likely to be a mixture of prescribed and wild fires.

The waters in this image are jewel-like: turquoise, bright blue, and emerald green near the islands, as well as the deeper blue of the Gulf of Mexico (left) and the Atlantic Ocean (right). The brighter colors surrounding the Bahamas (the islands north of Cuba) are caused by the relatively shallow waters over the Little and Great Bahama Banks, which are shelves of land that were submerged as the continental glaciers of the last ice age melted. The brightly-colored waters around Cuba and Florida’s tip (visible at the top of the image) could be a consequence of shallow waters, but could also be colored by a larger presence of microscopic marine organisms, such as algae and phytoplankton, which lend a darker-green tinge to the water.

NASA says MODIS captured the image on April 2, 2010. MODIS, or Moderate Resolution Imaging Spectroradiometer, "is a key instrument aboard the Terra (EOS AM) and Aqua (EOS PM) satellites," NASA says.
"Terra's orbit around the Earth is timed so that it passes from north to south across the equator in the morning, while Aqua passes south to north over the equator in the afternoon."
Posted by alongthemalecon at 4:05:00 PM