An "unavoidable scheduling conflict" has forced prosecutors to ask that the May 20 status conference in Luis Posada Carriles' case be rescheduled for June 2.
The judge granted the request, which Posada Carriles' defense lawyers did not oppose.
The motion does not explain the scheduling conflict. That's no surprise. Prosecutors, the defense and the judge have carried out - and dragged out - this case under a veil of secrecy, some of it taxpayer-financed.
I wonder what unavoidable conflict led to the need for the scheduling change. Doesn't the Department of Justice have anyone who can keep track of these things?
For fiscal 2010, DOJ budgeted for 111,993 positions, which is more than the population of Allentown, Pa. For 2011, DOJ is asking for another 2,880 positions. Seems like DOJ ought to be able to spare someone to handle scheduling.
OK, that's an unfair comparison, I know. Let's stick to the U.S. Attorneys' resources. Fiscal 2010:
Request for 2011:
Looks like Acting U.S. Attorney Michael J. Mullaney has plenty of warm bodies. And these folks aren't cheap. His legions of attorneys earn from $62,467 to $155,500 per year, according to the DOJ.

Let's just hope one of them will be able to read or locate a calendar so this Posada Carriles case can go to trial before the 82-year-old defendant reaches his 90th birthday. 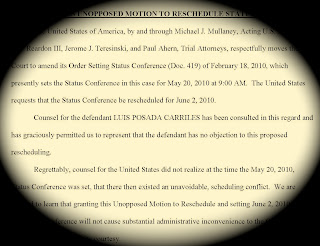 Here's the text of prosecutors' motion in Posada Carriles' case:

Link:
Along the Malecon's Anti-Castro militants page
Posted by alongthemalecon at 11:06:00 PM