Free the Five committee seeks records on payments to journalists 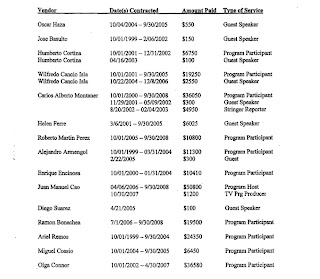 U.S. government efforts to undermine Cuba's socialist government and influence public opinion have spilled over into South Florida, violating U.S. law, the National Committee to Free the Five said June 2 in Washington, D.C.
The committee, which seeks the release of five Cuban spies held in American jails, says the U.S. government should not have been paying independent journalists while they were reporting on the federal prosecution of the spies in Miami from November 1999 to December 2001.
The committee is battling the Broadcasting Board of Governors, or BBG, for records of payments to journalists who cover Cuba.
The BBG is a U.S. government agency. It operates the Voice of America, Radio and TV Marti and other broadcast programming and claims a weekly audience of 75 million people around the world.
The Free the Five committee contends that the BBG was breaking the law because BBG international programs were targeting people living in the United States.
The Partnership for Civil Justice filed a lawsuit against the BBG on behalf of the committee seeking the release of documents on payments to journalists who cover Cuba issues. The lawsuit says:


The public has an immediate right to know about matters involving improper domestic propaganda as well as whether the U.S. Government compromised the fundamental right to a fair trial of the Cuban Five. These journalists engaged in repeated publications of purportedly independent articles. The articles include many that were highly incendiary, included false information and poisoned domestic public opinion during the prosecution, trial and conviction of the Cuban Five.

Gloria La Riva, coordinator of the Cuban Five committee, said in a statement:


Many of the articles and commentaries by the government-paid journalists were highly prejudicial and biased, with the obvious aim of negatively influencing the Miami public and the jury pool, convicting the Cuban Five, and depriving them of the fundamental right to a fair trial.

The Miami Herald reported in 2006 that at least 10 South Florida journalists had been getting regular payments from the BBG. Two of the reporters - Pablo Alfonso and Wilfredo Cancio Isla - worked at a Herald publication, El Nuevo Herald. Herald editors questioned editors of the Spanish-language paper about the payments and the two reporters were immediately fired.
Through FOIA, the Free the Five committee obtained documents showing that Alfonso received payments totalling $250,925.
When news of the payments first broke in 2006, Alfonso told the Herald, "I don't have any comment. I believe that's better for the newspaper and for me."
Cancio Isla also declined to comment at that time.
Channel 41 reporter Juan Manuel Cao received $52,000, according to documents obtained by the committee. He was unapologetic in 2006, saying: "I feel proud to help break censorship in Cuba."
Cao told the Herald, "There is nothing suspect in this. I would do it for free. But the regulations don't allow it. I charge symbolically, below market prices."
The BBG released documents showing tens of thousands of dollars in payments to journalists. Listed under service performed were: guest speaker, program participant, stringer reporter, program host, TV program producer, moderator, reporter, TV guest, TV host and "voicing, writing and researching."
The Free the Five committee has requested documents going back to 1996, but says the BBG has been uncooperative. The committee said the BBG said at one point that the committee would have to pay $31,192 in processing fees, which it described as "plainly inflated." Yet even after the committee agree to make any necessary payments, it says the BBG has refused to release information all the information the committee requested, including contracts giving additional information about payments to journalists.
According to the Free the Five committee:


Key information initially released by the BBG to the Committee made clear that the amount of covert government payments to journalists is substantial - however the agency is refusing to hand over critical underlying documents to the National Committee and is fighting to keep this information from becoming subject to public scrutiny.

The Partnership for Civil Justice complaint says, "The board has flatly refused to comply with this request..."
The complaint cites the OPEN Government Act of 2007, which says:


The American people firmly believe that our system of government must itself be governed by a presumption of openness.

I believe that the BBG should release the records. Refusing to release information makes it appear the BBG is hiding something. Why not just release the records? It's the right thing to do.
That said, I don't agree with the Free the Five committee's conclusion that a government conspiracy was at work specifically to sway the jury or public opinion in the spy prosecution. I haven't seen any evidence of that.


Documents:
September 2009 complaint for injunctive relief
May 20, 2010, motion for summary judgment
Posted by alongthemalecon at 8:49:00 AM

Email ThisBlogThis!Share to TwitterShare to FacebookShare to Pinterest
Labels: broadcasting board of governors, free the five, partnership for civil justice, payments to journalists

The Cuban Five are spies...convicted spies. There is never any mention by supporters of los cinco gusanos infiltrating U.S. military bases or the Brothers To The Rescue humanitarian organization.

There's never any mention of Rene, Gerardo or Juan Pablo Roque setting up the shoot down and murder of 4 innocent men over international waters.

To read the truth about the Cuban Five, read: BETRAYAL: Clinton, Castro & The Cuban Five.

The brotherhood of los cinco gusanos is so weak that three of them will do anything to accept sentence reductions and leave Gerardo to rot and die in a U.S. jail. It is justice served.

Thanks for your comment, Matt. I've been meaning to check out your book. Your comment reminded me of that and I just ordered Betrayal on Amazon.com.
Tracey

"I don't agree with the Free the Five committee's conclusion that a government conspiracy was at work specifically to sway the jury or public opinion in the spy prosecution. I haven't seen any evidence of that."
Well, would any employee of the BBG really need explicit instructions to engage in such a conspiracy? The same question might also apply to reporters employed by major US media outlets.