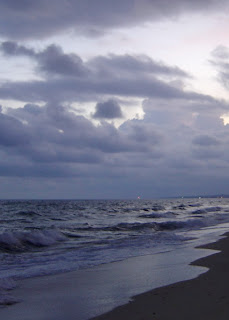 Sunrise east of Havana.
It is remarkable that Cuban authorities allowed Alan Gross to spend time with his wife at the beach.
Gross is the U.S. subcontractor who has been in prison in Cuba since December.
On Thursday, Reuters said:


The couple reportedly spent time together at the beach in their first meeting since his arrest at Havana airport in early December.

If true, the report underscores just how coveted a prisoner Gross is for the socialist government.
I've never thought that Cuban authorities will release him without getting something in return.
He is too valuable. As Cuban officials see it, Gross is a living, breathing example of U.S. officials' efforts to undermine the Cuban government.
Gross has tremendous symbolic value. I think Cuban officials also see him as a bargaining chip in their efforts to free five Cuban agents held in American prisons.
If the Reuters report is accurate and Judy Gross was allowed to not only visit her husband, but go to the beach, it shows the Cubans are taking extraordinary measures to take care of Alan Gross.
Wouldn't it be something if Gross developed Stockholm syndrome and began to develop positive feelings about the Cuban government?
No doubt, Alan Gross will have quite a story to tell once all this is over.
The Cubans will have a story of their own. And I'll bet they'll have video, too, including footage from the beach visit, something to tuck away and perhaps use at some point to contrast their handling of Gross with the U.S. treatment of the Cuban Five.
Posted by alongthemalecon at 10:53:00 AM