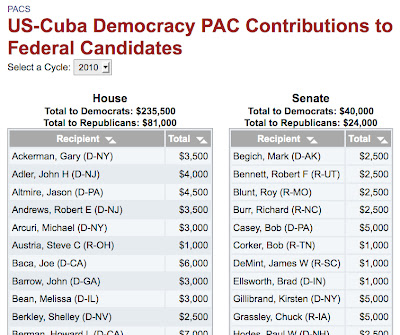 Howard Berman, a California Democrat who says he wants to lift the ban on travel to Cuba, accepted a $7,000 donation from a political action committee that favors economic sanctions against the socialist government, records show.
Berman, chair of the House Committee on Foreign Relations, announced Tuesday that he was postponing a Sept. 29 hearing on a measure aimed at loosening the travel ban.
In 2010, the U.S.-Cuba Democracy PAC contributed $7,000 to Berman, according to OpenSecrets.org, which touts itself as a "nonpartisan guide to money’s influence on U.S. elections and public policy."
OpenSecrets said the U.S.-Cuba Democracy PAC contributed to $380,000 to federal lawmakers in 2010, based on records submitted to the Federal Elections Commission on Sept. 13.. That included:

I don't know. Is this money talking, or what?
Posted by alongthemalecon at 7:06:00 AM

It could be that my post is too cynical. I mean, maybe politicians just take any money that comes their way.
But, in an ideal world, you'd think that a politician would - and should - reject money that comes from groups that are fighting for causes that go against the politician's beliefs.

Any funds given from pro-American rights to travel PAC?

Right. I didn't think so.

I have no idea if that $7,000 influenced Howard Berman. You'd hope that someone wouldn't be influenced so easily. Whatever the case, there is a ton of PAC money floating around in Washington and I'm sure the PACs wouldn't be handing it out if it didn't produce results on some level.