Danny Glover: Cuban Five risked their lives to save others 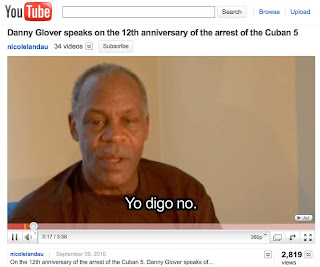 Here is a transcript of Danny Glover’s latest appeal for the release of the Cuban Five. The actor recorded this message to mark the 12th anniversary of the arrest of the Cuban agents.


When I talk to people I know about the Cuban Five, some of them tell me that they heard their last CD. I said no.
Oh, you mean the basketball team.
(Glover smiles and shakes his head).
Twelve years after five men were arrested and nine years after they were condemned to long prison terms, a lot of people still do not know about the case of the Cuban Five.
Think about American men and women who volunteer to go abroad to try to stop violence against this country. They infiltrate terrorist cells and provide the information to authorities. That’s what the Cuban Five did, only they did it in Miami.
And the cells they infiltrated were not American haters, but Cuban exiles plotting bombings and other acts of violence against innocent civilians in Cuba. That’s the Cuban Five.
And like good American agents, they passed this information on to headquarters and the headquarters in Cuba passed it along to the FBI, so that the bureau could find the explosives that were destined to harm innocent civilians.
Think about… just imagine a boatload of explosives coming down the Miami River to some river in Cuba. It’s designed to harm innocent civilians and foreign tourists and maybe even Americans.
Now the Cuban Five risked their lives to save the lives of others. If it had been Americans they would have become awarded medals. They would have become heroes. But they were arrested, tried and condemned in Miami where the chances of getting a fair trial were – on a 1 to 10 scale – zero.
On a hot, very hot Sunday afternoon, I went to Victorville, California, to visit one of the Cuban Five (Gerardo Hernandez).
He’s a big, brave strong man who believes in fairness and justice.
Seven years ago when I met the wives of the Cuban Five, I promised that I would do all that I can, (that) their husbands receive justice.
Today I’m still here to say that I’m here to do all that I can to make sure that these men are released, sent home to their families, released from these deplorable conditions in prison and sent home to their families.
That’s what we all can do. We can make sure that justice is served right here. Men who were brave enough to come here and to fight for the safety of their fellow citizens in Cuba. This is the truth about the Cuban Five. The truth that is not often told, the truth about what the Cuban Five did.
Let us all come to together and work together to free the Cuban Five. Thank you.