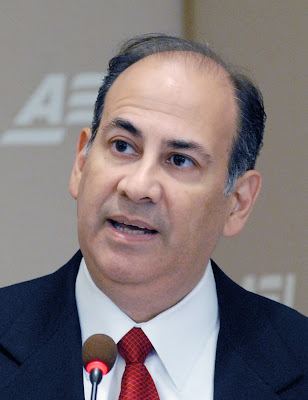 Roger Noriega. Photo credit: American Enterprise Institute for Public Policy Research
Saul Landau and Nelson Valdes ask whether U.S. officials broke the law when reportedly trying to provoke chaos in Cuba while James Cason was chief of the U.S. Interests Section in Havana.
Writing in Progreso Weekly, Landau and Valdes revisit a May radio interview in which Roger Noriega, former Assistant Secretary of State for Western Hemisphere Affairs, said that he and Cason "sought to promote chaos in the island."
The article says:


Noriega did not refer to the chaos plan as coming from a secret decision of President Bush. Rather, Noriega and his cabal undertook their own initiative to foster instability. The effort led to the imprisonment of 75 Cuban citizens who followed the chaos-promotion instructions.
On May 20th, Noriega boasted on WQBA (Miami Univision station) about plotting with Cason to force the Cuban government to break its limited diplomatic relations with the United States.
But did high State Department officials conspire with underlings in the Interest Section to foster chaos in Cuba, a far cry from “the promotion of a peaceful transition” written into the Interest Section charter?

Landau and Valdes wonder if Noriega and Cason broke the law. The writers ask:


Do government officials conspiring to change policy without a constitutional basis constitute a violation of U.S. law?
Can the victims of Noriega’s bungling -- the 75 and their families -- file lawsuits for damages?
Should Roger and James seek legal counsel?

Noriega is a visiting fellow at the American Enterprise Institute. Cason is running for mayor in Coral Gables. I have sent each an e-mail asking for feedback on the Progreso Weekly article.

Update:
Roger Noriega's response is here.
Posted by alongthemalecon at 7:04:00 AM